The Palace for Life Women’s Walking Football team has reached the finals of the FA People’s Cup after seeing off opposition from Tottenham, Portsmouth and Birmingham. 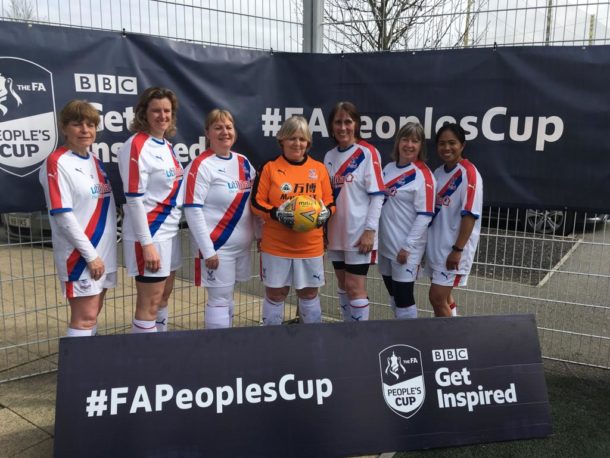 The FA People’s Cup is the nation’s biggest, and most inclusive, five-a-side tournament, with over 45,000 teams taking part across 15 categories including futsal, disability age groups, veterans and walking football.

The semi-finals took place on Sunday 24 March at Goals in Wimbledon, where Palace won all three of their fixtures and will now progress to the Finals at St. George’s Park on Saturday 28 and Sunday 29 April.

Team captain and Palace season ticket holder Catherine D’Rozario said: “Despite initial nerves we did extremely well to win all five matches, demonstrating how much the team have improved over the past weeks. We are all so excited and can’t quite believe that we have reached the finals and actually have the opportunity to play at England’s training ground.”

Women and Girls Development Manager at Palace for Life Foundation, Roxanne Bennett, said: “We’re extremely proud of the players for this outstanding achievement in what is only their first season playing together.

“Walking football gives people who might otherwise be excluded from football the chance to play, whether that’s returning to the game, or playing for the first time.

“The chance to play at St. George’s Park is a once-in-a-lifetime opportunity and I hope they enjoy every minute!”

The winners of each category will be invited to Wembley to watch the FA Cup Final and receive their trophy.

Walking Football is a slow-paced version of the game and is designed to help people keep an active lifestyle despite their age, as well as getting those back into playing football. Our sessions are aimed at, but not limited to, over 40-year olds.

To book a place on the session click here. Alternatively, to find out more please contact RoxanneBennett@palaceforlife.org