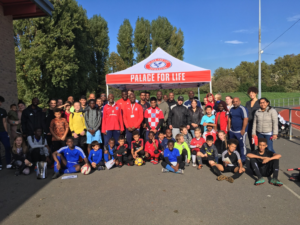 Almost 100 people attended an event to help a schoolboy with his battle against cancer on Saturday, writes freelance journalist Will Beckman.

Damary Dawkins, 12, was diagnosed with acute lymphoblastic leukemia in 2015 and needs a blood stem cell transplant before Christmas.

Nobody in his family can provide a match, so he is relying upon a stranger to sign up and save his life.

However, his African-Caribbean heritage means there is only a 20% chance that will happen.

A donor recruitment drive was held at his local club this weekend, Euro Dagenham FC, who organised the event with Crystal Palace FC and blood cancer charity DKMS.

37 people registered as donors while around 60 others asked for DKMS to send out swabs to their home addresses. 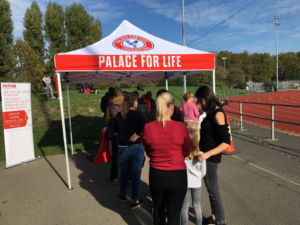 100 more signed up at an identical drive in Croydon on 2 October, meaning the total number of potential donors could rise to nearly 200.

Damary was unable to attend on Saturday due to his poor health, but father Tony did appear and was overwhelmed by the strong turnout.

“It’s humbling for me to know this is the support Damary gets,” he said. “Euro Dagenham is a community club where we look after each other. He’s loved here.

“It’s not just my boy who needs a donor, though. I organised this drive for Damary but I’m doing this for all kids with cancer.

“Cancer doesn’t discriminate, so why should we?”

Damary finished a three-year chemotherapy treatment course in July, but instead of being given the all-clear he was told he had relapsed and could now only be saved by a stem cell transplant.

Tony, mother Nadine, and half-sister Ptmone visit him regularly at University College London Hospital, where he moved two weeks ago.

Tony added: “His world has been turned upside down since July. He never thought he’d be back in this position.” 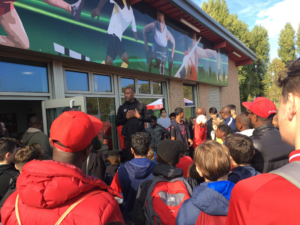 Pat Gordon has coached Damary since he joined Crystal Palace’s Elite Player Development center in 2014, and thanked everyone who signed up on Saturday.

He said: “We really appreciate people coming down and supporting Damary.

“When you coach young kids it’s like you’re a parent to them. I feel obliged to try and help everyone in Damary’s situation. “The reason we’re here today is to save lives.”

Osama El-Amin attended the drive for DKMS and encouraged people from all ethnic backgrounds to enroll, saying: “People of mixed-raced heritage are massively underrepresented on our registry.”