At the Palace For Life Foundation we're delighted to share the news that 12-year-old Damary Dawkins has received a blood stem cell transplant and is now recovering in hospital.

Damary has been fighting Acute Lymphoblastic Leukaemia (ALL) for the past four years, and despite three years of intensive chemotherapy, he was given the news that his only chance of survival would be with a blood stem cell donation.

A member of Palace For Life Foundation’s Player Development Centre in Bromley, Damary’s family were told his treatment would end in July 2018, then being free of cancer. However, they instead received the news that he had relapsed.

Despite an appeal which saw Crystal Palace FC and the Palace For Life Foundation team up with blood cancer charity DKMS, Damary’s family were then told in October that he would need to find a match by Christmas for a chance at survival.  No match was found within Damary’s family, meaning he became reliant on finding a genetic match from a total stranger. A lack of black, Asian and mixed race donors on the stem cell registry made the search harder due to Damary’s African-Caribbean heritage.

Thankfully, a match was found just in time and the transplant took place a couple of days before Christmas.

This couldn’t have been done without everyone who supported the #Donate4Damary appeal, and thank you to everyone who continues to support the fight against blood cancer. 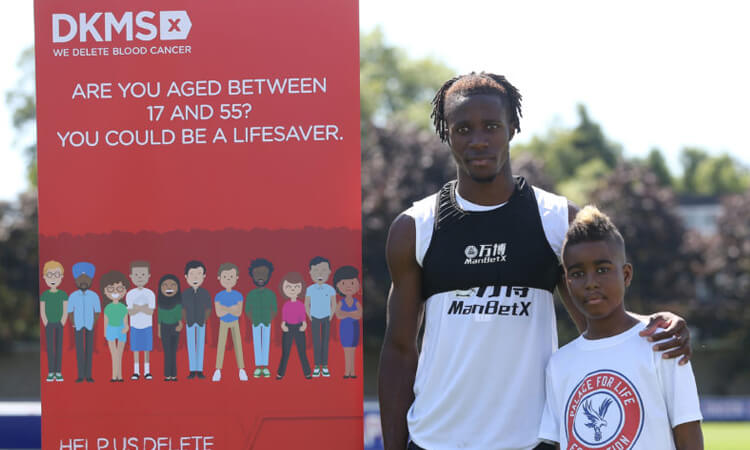 A blood stem cell donation is often the only chance of survival for many blood cancer and blood disorder patients. Sadly, many patients will not find a matching donor. This isn’t because a match doesn’t exist, it’s simply because there aren’t enough people registered as donors. That is why DKMS works to increase the size and diversity of the blood stem cell registry.

Anyone in the UK aged between 17 and 55 and in good general health can register with DKMS. To register, the charity asks potential blood stem cell donors to give consent and a three-minute swab sample from the inside of their cheek. This is done at one of their donor recruitment events or via requesting a kit from their website.

Every 20 minutes someone in the UK is diagnosed with blood cancer, it’s the third most common cause of death in the UK. Join the likes of Palace For Life staff Donald and Ellie, and register as a potential blood stem cell donor, HERE.

It costs DKMS £40 to register a new potential blood stem cell donor. As a charity, DKMS relies on contributions from the public to help cover these costs. Anyone wishing to help DKMS reach and register more potential lifesavers can donate HERE.

Join the likes of Palace For Life staff Donald and Ellie, and register as a potential blood stem cell donor, here.