Wilf Zaha made an apperance at the University of Roehampton Post-16 Education Training on Friday to meet the aspiring players and give them some advice.

Wilf Zaha made a surprise stop at a local training session for talented teenage footballers, sharing his advice and answering the young players’ questions at Selhurst Sports Arena in south London.

The Palace forward was visiting players from Palace for Life Foundation’s Post-16 programme, which gives 16 to 18 year-olds the chance to study at college or university alongside playing football at a competitive level. 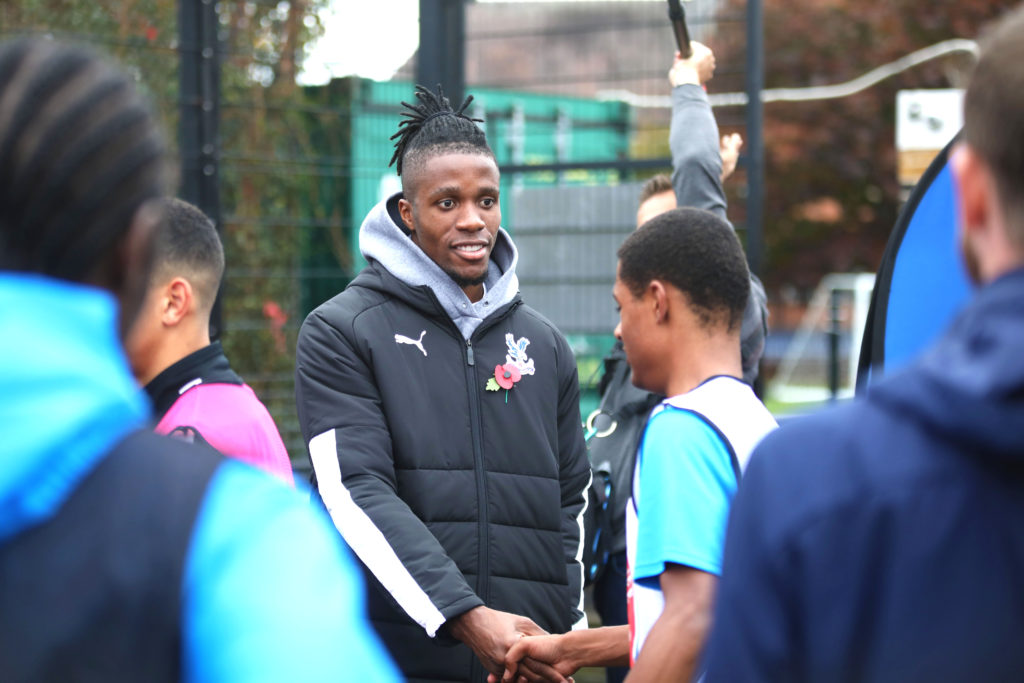 Wilf Zaha said: “It’s always nice to meet aspiring young players, I was really impressed with their positive attitude and to see how hard they were working in training. Education is so important and it’s good that the Foundation is encouraging them to study alongside their football.”

Palace for Life Foundation has Post-16 centres at seven sixth-form colleges, as well as a new partnership with the University of Roehampton, which allows students to study for A-Levels, BTECs or a degree whilst training with Palace for Life coaches and representing Crystal Palace in national football leagues.

Players from Harris Academy South Norwood and the University of Roehampton have formed a team that competes in the U19 National Youth League, training three times a week and playing matches on a Wednesday. 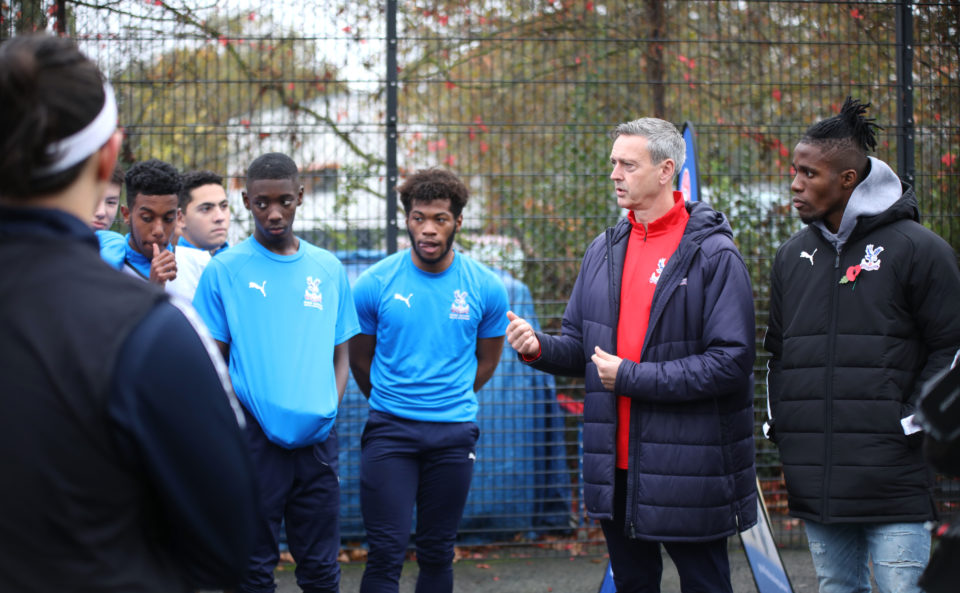 Palace for Life’s Head Coach at Harris Academy South Norwood Chris Green explained: “The most important thing for us is their education, we’re in close contact with the teachers, they let us know if someone is behind and we’ll take them out of the programme until they catch up, so they have to manage their lessons and their time well, but we’re there to support them.

“We want to replicate life as a professional footballer as well as we can, so we train hard and we travel across the country to play teams from other clubs.

“We can also offer them work experience, so last year we had more than 20 boys working on a matchday at Selhurst Park, so they’re earning a bit of money. We can also help them to do their FA Level 1 coaching badge so if any of them have aspirations to do coaching, they can then also come back and do some work for us. 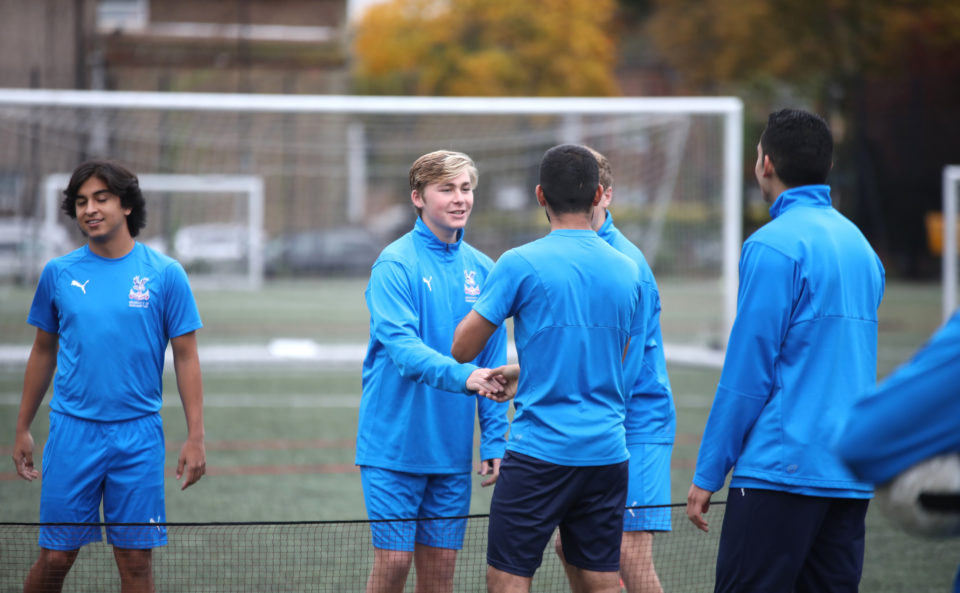 Chris was on hand to meet Wilf and talk to him about the programme and felt that the players were inspired to have met him:

“The boys really enjoyed it, Wilf’s from round here and he knows what it’s like, he often drives past us on his way home from training and gives us a toot! He’s a fantastic role model for our players, it shows them that if they put the hard work in and they study hard, there’s hope for them to make it.”

One of the players to meet Wilf was 17-year-old Ashley Thompson who is a second year student at Harris Academy South Norwood: “It was nice to meet Wilf and see how he was able to relate to us, even though we’re not at his level yet, it shows us that we can make it, because he’s from round here too.

“Being part of the programme with Palace is a great experience, travelling all across the country and playing different teams at a competitive level, we get good support from the coaches and physios, it’s like living the professional life.

“Ultimately I want to play professionally, whether here or abroad, this programme has given me lots of experiences to prepare me for that and give me the edge.”

Also in attendance was Parker Moore, 18, who was scouted in America and is now studying for a degree in Sports Coaching at the University of Roehampton alongside playing with Palace: “It’s something we’ve all dreamed about since we were kids, especially in America where football isn’t so big. It’s been wonderful to be here, we’re so well looked after and we’re learning the culture and the new slang! It’s a different style of football with a lot more physicality, but it’s a lot of fun.” 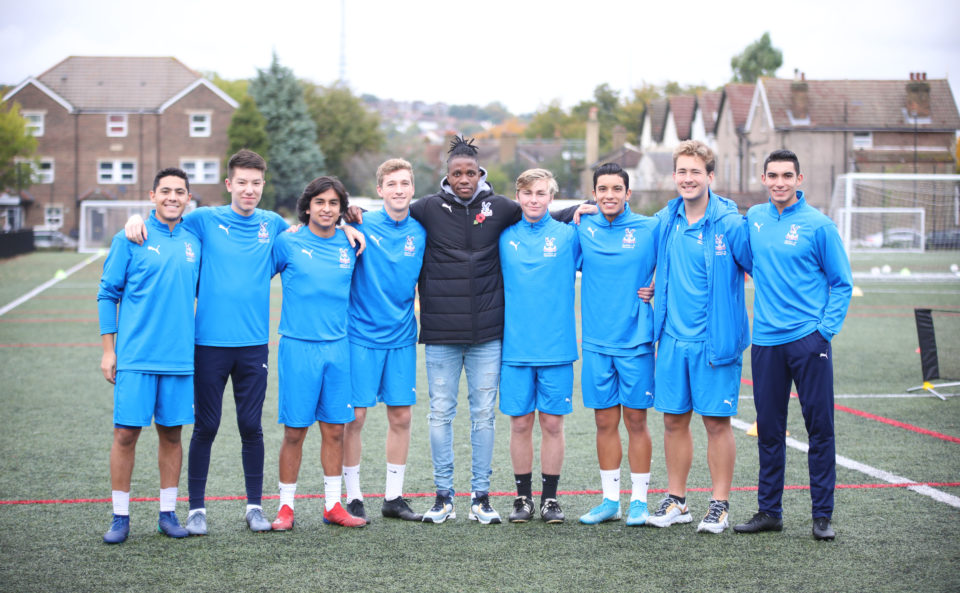 Speaking about playing with the American players, Ashley added: “It’s really nice, different culture and the way they play is a bit different, so being able to integrate the two teams and develop a new style is great, playing with them is a real honour.”