Palace first team player Aaron Wan-Bissaka delighted pupils at his old primary school this week by paying them a surprise visit during a school assembly.

An afternoon with a difference started at Good Shepherd Catholic Primary School in New Addington with the pupils being greeted by children’s television presenter, Ben Shires, who excited the crowd before introducing former pupil, Aaron Wan-Bissaka. 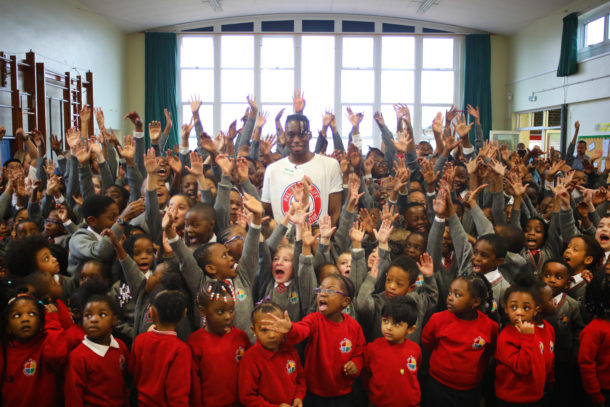 Keen to visit his old school and help to inspire the current generation of pupils, the Palace right-back walked out to chants of his name before taking part in a question and answer session, led by Shires. This was followed by football quiz, where three lucky pupils joined Wan-Bissaka on stage to test their football knowledge.

The defender had one last surprise for the pupils, as he gave the school a gift of a signed, match worn shirt.

On returning to his primary school Wan-Bissaka said: “It felt good, I haven’t been back here in a while and my memories of this place are all positive, so it’s great to be back.

“I didn’t expect that reception, I’ve never had anything like that, but it felt good! It shows that I’ve come a long way, the last time I was here was ten years ago, so to get that reception from the kids was amazing.”

Many of the teachers remembered Wan-Bissaka from his time at the school, ten years ago, including his former Teaching Assistant, Elaine Snow: “I was his TA back in year six, we had a mad class but he was a really good boy, he loved football even then, all of the boys did!”

“The kids have absolutely loved it, this will be a memory forever for them, for Aaron to come back to New Addington, where his roots are, is just lovely. We will frame the shirt and keep that forever.”

Another member of staff with fond memories of the player was caretaker, Colm Conneely, who added: “It was lovely to see him after all these years, he was a good lad when he was here, he was never in trouble, the best part was he hadn’t forgotten my name!”