For almost 100 years, countless legends have graced the hallowed turf of Selhurst Park and created unforgettable moments. On May 27th it’s your turn! Through a series of auctions fans will be able to bid for the chance to play for and alongside former Crystal Palace players with the two teams managed by Palace legends Julian Speroni and Eddie McGoldrick.

Each auction is for a position in one of two teams, for either the first half or second half of the game. Bidding will start at £100 for each position, and if a bid surpasses £200, the winning bidder can have their names printed on the back of their shirts and keep the whole kit afterwards.

Eddie McGoldrick, former player and Palace for Life Foundation Academy Head Coach, has been appointed manager of one of the teams. He said “To have that feeling, with their shirt hung up and knowing they’re going to pull the Palace kit on and whip it up on the pitch at SE25, the Church, it’s going to be a dream come true for any fan and a day they will never forget” 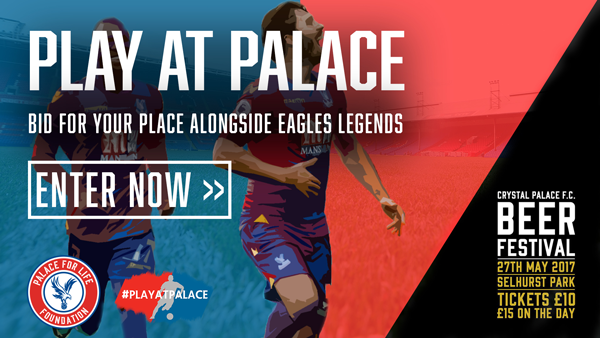 Successful bids will enjoy the full player experience – entering through the ‘players only’ gate, having their personal kit laid out for them in the changing rooms, enjoy team talks and tactics from their managers and then making the walk to the pitch that only a player has known. Each winning bidder will then play an unforgettable half for their team in front of a Holmesdale crowd, and support the other half from the dugout.

After the match, both squads can enjoy a drink together and watch the FA Cup on the big screen at the annual Crystal Palace Beer Festival, for which all players will receive free entry.