Tony Perrock, 27 first came into contact with the Palace for Life Foundation as a participant in disability courses when he was a teenager. As a sick child, Tony had a few close health calls and spent long spells in hospital with bowel issues and eyesight problems. 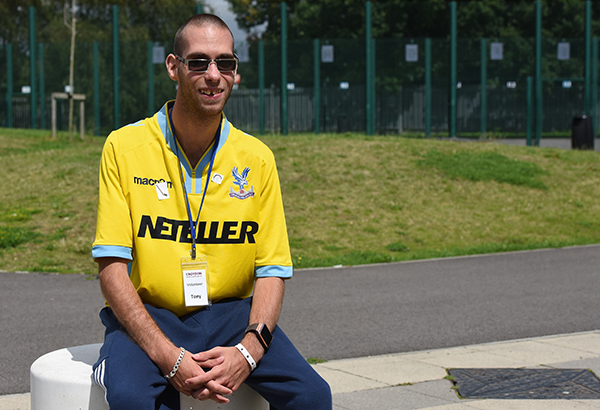 Anne-Marie Abalo, who works in youth services at Croydon Council and has known Tony for over 10 years, said: “There were times when he was in hospital and we weren’t sure whether he would come out again. There were so many different things – he’s got one false eye, he couldn’t eat properly, he had so many tubes in him and we were so scared.”

Testament to Tony’s resilience and determination is the fact that he has come back from these health issues to now volunteer at Foundation events such as the Sports Inclusion Day for the past few years.

Both Tony and Anne-Marie have noticed the difference that both participating in and volunteering at Foundation events has made. Anne-Marie recognises: “You can see, he’ll offer to help anyone now, he’s so much more confident, it’s helped him in everyday life – you can’t stop him talking now!”

Tony agrees that he has become more confident as a result of his involvement with Foundation programmes, and he hopes to still be helping at these events in years to come. His commitment to helping other people is illustrated by the fact that despite living in Purley, he is willing to travel across south London to help at events on a regular basis.

Disability Manager Michael Harrington reflects: “It has been great to see the change in Tony as a result of being involved in these programmes. His progress goes to show the unique benefits that sport and physical activity bring to improve our physical, mental and overall well-being.”

Anne-Marie herself has also had a significant role to play in Tony’s progress, but she highlights: “Just being in the atmosphere at these events has helped to support him, and he’s been supported by other people. He’s now got a real quality of life, and a purpose. You can’t stop him now.”