Palace for Life support You vs. Train safety campaign

Palace for Life Foundation are supporting Network Rail's You vs. Train campaign, which is aiming to make young people more aware of dangers on train tracks.

In London, 57% of teenagers said they had walked on a train track in the past year, while one in six would consider doing it in the future if they dropped a mobile phone. 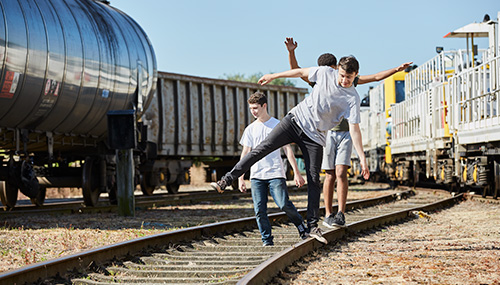 The rail industry and British Transport Police launched the You vs. Train campaign last year to try and educate more young people about the risks. Since then, the number of incidents involving children fell by 12% but young people continue to put themselves at high risk.

Palace for Life Foundation is proud to be championing the campaign and will be running educational assemblies in schools to help spread the message and try and keep more young people safe.

Donald Forde, deputy CEO at Palace for Life Foundation, explained: “We work with over 14,000 young people in south London every year, using the power of Crystal Palace F.C. to inspire them to lead healthy lives and find brighter futures. The You vs. Train campaign is spreading an extremely important message about safety and we are proud to help continue that.”

The railway is full of hidden dangers – if you don’t get hit by a train, the electrified third rail could kill you. The third rail carries 750 volts. This rail powers electric trains and is found on tracks in the South East of England, however, research shows a large proportion of young people remain unaware of its potentially fatal dangers.

Figures published by Network Rail show police have recorded more than 250 incidents a week of people messing about on the railway – taking short-cuts, capturing photos and even ‘train surfing’ – sometimes with tragic consequences. With young people involved in a third of all cases.

Allan Spence, head of passenger and public safety at Network Rail, said: “Children, and adults alike, continue to risk their lives by going onto the track and it has to stop. Every day we see over three dozen incidents and each one could be a potential catastrophe leading to life-changing injuries or even death.”

The rail industry has launched a new phase of the You vs. Train campaign in response.

To watch the new video and find out how to keep your children safe on the railway visit: www.YouVsTrain.co.uk and follow #YouVsTrain on social media.