Palace fans to lead mental health walk to the Emirates

Earlier this year Palace fan Paul Price organised a joint fan walk in the name of raising mental health awareness. The event was organised with Fulham FC fans and saw the group of rival fans walk from Craven Cottage to Selhurst Park prior to February’s Premier League clash between the two sides.

Paul is now organising another walk, this time to the Emirates ahead of Palace’s game v Arsenal on Sunday 21 April, and we caught up with him to find out more:

In February this year, over 70 Palace and Fulham fans embarked on a walk together to raise awareness of mental health and male suicide.

Following the success of this walk from Craven Cottage to Selhurst Park, fans of Crystal Palace and Arsenal have now linked up for a further event which will take place on the 21 April for the Palace away game at the Emirates. 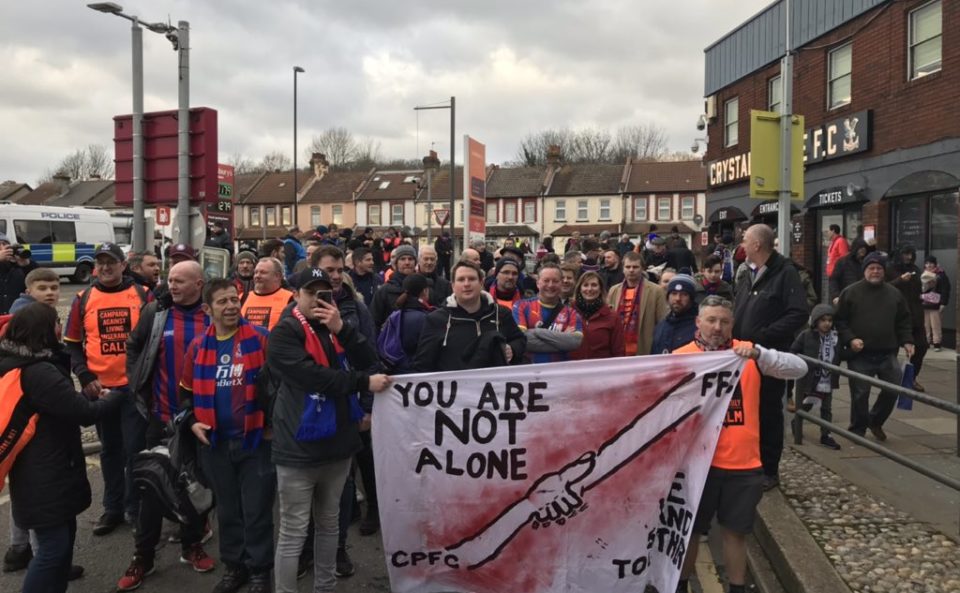 This will be another mental health and male suicide awareness walk from Selhurst Park up to the Emirates Stadium in North London.  The fans will cover a distance of around 12 miles which will take about four and a half, to five hours (including stops).

The walk is being undertaken as a direct result of personal experiences of many of the participants and, also because of horrendous statistics on mental health and male suicide.

Mental health impacts one person in four but is much further reaching as it can have an impact to friends and family of sufferers which can then create a tough and challenging environment in the home, at work or in social situations.

Male suicide covers 75% of all suicides in the UK and is the biggest killer of men under 45 years of age.  It is estimated that roughly 12 men take their own life every single day which equates to around 84 a week  and 4,500 a year which is a staggering and upsetting statistic.

Men in particular are not good at expressing their feelings and opening up but, finding the courage to talk and find help is life changing and, in some cases life saving.

Help is out there in many places and in many forms but, men typically bottle things up and take on all the pressure which can lead to terrible circumstances.

From the personal experience of both organisers who have opened up and sought help in the past, the belief is that talking is the most powerful tool available, it is the starting point to recovery and can in turn save lives.

The walks were set-up to raise awareness of both mental health and male suicide but also because it is believed that this initiative can make a real difference in encouraging people to find the courage to talk and find help.

The walk is the centre-piece to bring people together, it is aimed at demonstrating how powerful talking is and, as such is organised as a very social “walk and talk” event.  The true vehicle to publicise the message is the media or social media of the event where the message can be spread easily and reach out to many. 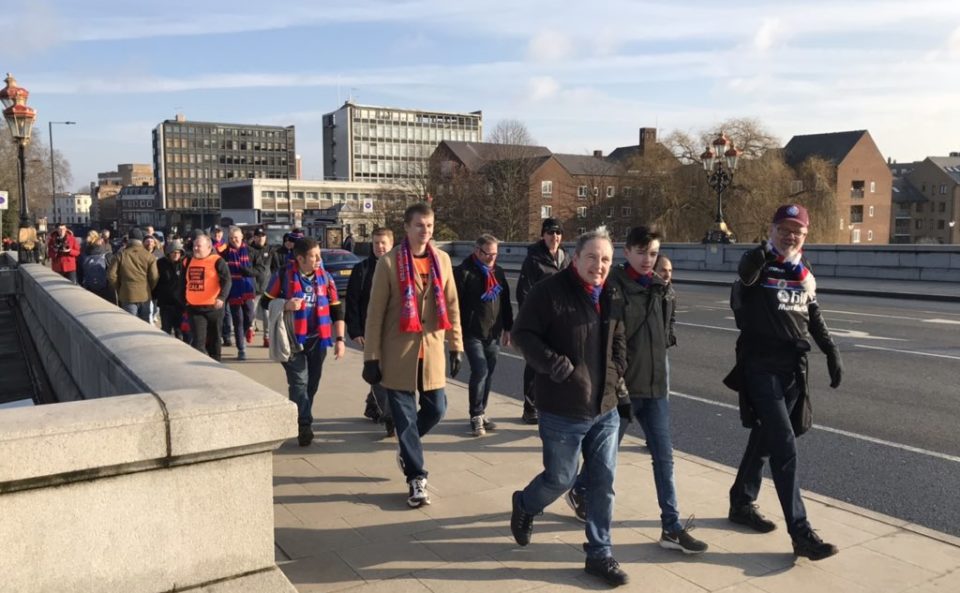 Undertaking the event on a match-day with opposing fans walking together sends out a very powerful message in a world where football fans can be stereo-typed in negative ways.

Football itself is huge and powerful, it reaches every corner of the world and therefore billions of people.  Many of these people will suffer with mental health issues, may have contemplated suicide themselves or will know somebody that has made the decision to take their own life.

A lot of people interested in football and fans that attend games generally are men under 45.  This profile alone, based on the statistics makes football a fantastic conduit to reach potentially vulnerable people and, football fans therefore make the perfect target audience.

The embedded tweet from ITN news below shows our recent walk from Craven Cottage to Selhurst Park and gives a view of the initiative, what we are trying to achieve and footage of the event.

They may be rivals on the pitch but at the weekend @FulhamFC and @CPFC fans were united as they walked together – stadium to stadium – to help prevent suicide which is the biggest killer of men under the age of 45. @mikeyworrall1 joined them. pic.twitter.com/695Z7yJgwm

In the modern day and game, football is also followed by people of all ages, across both sexes and therefore getting the message out to encourage people to talk and seek help through football has huge potential.

The event itself is not about raising money and is all about raising awareness. It is aimed at sending out a message to encourage people to open up, to talk and to understand that they are not alone.

Proposed stops and the route are shown in the table below.  The route is designed so that people who don’t want to and cannot walk the entire distance can join or leave at any time along the route with timed stops along the way which are all in pubs next to train or tube stations for ease.

If you need help, or want to talk to someone, contact:-