Home > News > "Nothing like cycling to a chorus of ‘Eagles!’"

Last year, 20 Palace fans donned the famous red and blue stripes to take on the 100-mile challenge of the Prudential RideLondon cycle ride. The team raised a fantastic £12,000 to support our work with vulnerable young people in south London.

We are now looking for keen cyclists to take part in 2019. We caught up with some of last year’s riders, Andrew Johnson (not that one!), Nicola Cotton, Stuart Mackenzie, and Robert Barnes to find out how it went. 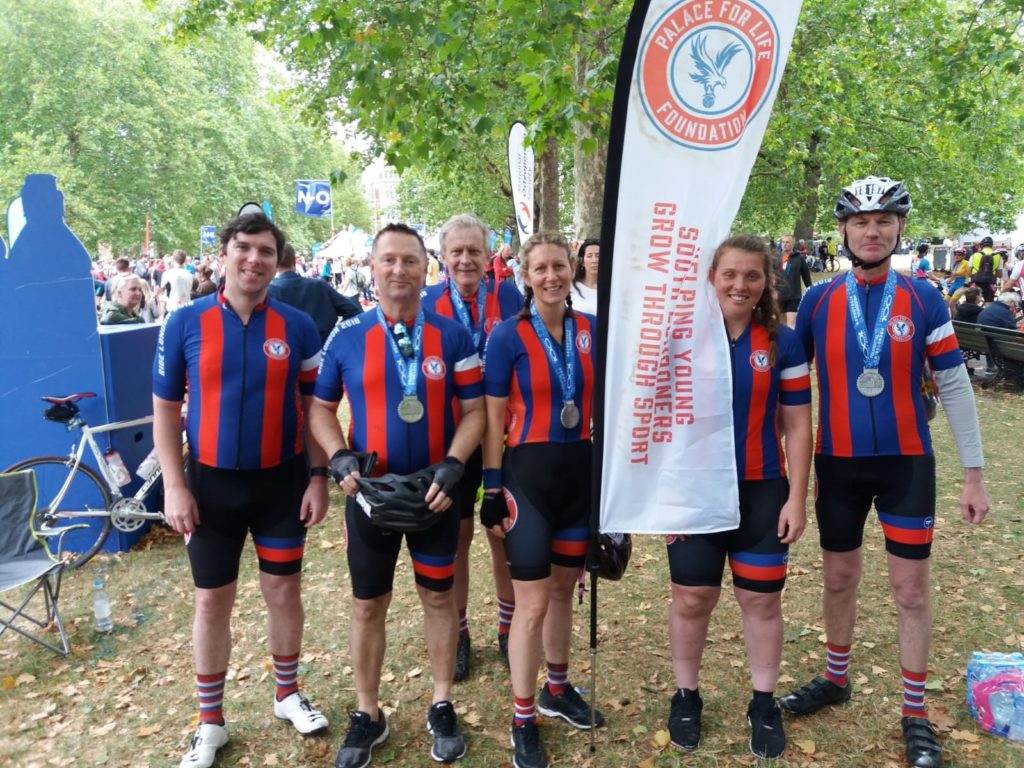 How long have you been a Palace fan?

AJ: My Grandfather took me to my first game on the 25th September 1976. We beat Mansfield 2-0. I was hooked! When I was a young boy my grandfather said to me…

Nicola: For as long as I can remember!

Robert: I have been watching Palace since 1977. The days of Cannon, Swindlehurst, and Hilaire!

Why did you decide to ride for Palace for Life Foundation?

AJ: I have completed the London Marathon a couple of times and over 50 half marathons including the Great North Run. As a season ticket holder, it made sense to do something for the Foundation and I actually started by walking the Marathon March last year (which I also completed this year). Being the adventurous type I thought I’d give cycling a go, hence the application to the team and this summer’s ride. From now on I’ll give all of my fundraisings to Palace for Life having met Angel [Foundation coach and former participant], it’s such a great cause.

Nicola: Because our son trained with the Foundation for over six years and received excellent coaching. This was a way of giving something back.

Stuart: It’s a great cause which helps my community.

Robert: I had originally seen the request for riders in one of the programmes last season. Ride London has always been on my bucket list so it seemed logical to combine the two. The whole of my training had taken place in the fantastic boiling summer weather. The first day of poor weather conditions was the event day! This is the kind of luck us Palace fans are used to, so nothing to worry about. Put simply, the event surpassed all my expectations. 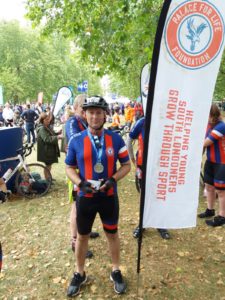 Can you describe the experience of taking part in RideLondon?

AJ: Wicked. Did I say Wicked at 51 yep I did, there you go? I absolutely loved it even though it rained and there was lots of it!

Nicola: Amazing despite the weather. There was a sense of camaraderie and everyone was so supportive.

What was it like to wear Palace kit on the day?

AJ: Brilliant and we got lots of respect from fellow cyclists and fans. Nothing like cycling down Dorking High Street to a chorus of “Eagles”! Also, the team photos at the end were brilliant.

Nicola: Really cool, I got lots of comments from other riders and it was easy to spot teammates.

Robert: Wearing the Palace colours made me feel so proud, certainly got plenty of banter from the other riders!

What was your highlight?

AJ: The whole day was very special from beginning to end. Actually cycling down The Mall flat out to the finish was for me the best moment of all.

Nicola: Highlights include being part of the Palace for Life team, that I didn’t fall off in the rain or get one puncture! And of course, finishing!

Stuart: Not having any punctures for the second half of the ride and the rain stopping. Meeting the amazing Palace for Life Foundation team in Green Park at the end.

Robert: So many highlights, bumping into AJ and Viv on the way around and being able to cycle up all the climbs without having to get off were my personal ones. 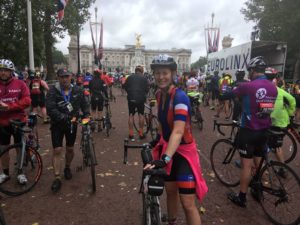 What advice would you give to someone thinking of taking part in RideLondon?

AJ: The harder you train, the more you will get from the day and when you get there, enjoy it. One big tip is to take at least two inner tube spares and a repair kit. Odds on you will get at least one puncture, even with puncture resistant tires, especially if you are in the wet so it also pays to be able to whip inner tube off and stick on another quickly.

Nicola: Do it for the Palace for Life Foundation as you’ll get loads of support leading up to it, during and after. Plus make sure you train as you’ll enjoy the day even more.

Robert: If you are thinking of signing up for next year, don’t hesitate. The support from the Palace for Life team and your fellow riders is brilliant. If the foundation could persuade a few Palace celebrity fans or former players to take part next year I’m sure it would be an even bigger success than this year.