On Saturday 7 October, over 100 Crystal Palace supporters turned out to walk 26.2 miles from Selhurst Park to Trafalgar Square, all in aid of the inaugural Palace for Life Foundation Marathon March, powered by Utilita. 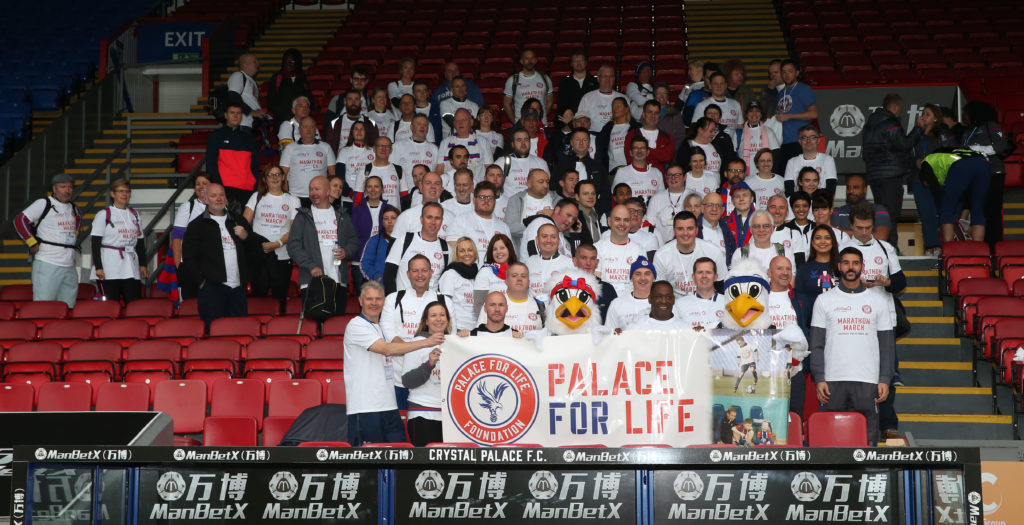 Palace legends Andrew Johnson and Andy Gray were joined by famous faces such as comedian Kevin Day and Eagles mascots Alice and Pete for the sponsored walk, which raised over £50,000 for the Foundation’s work with vulnerable young south Londoners. 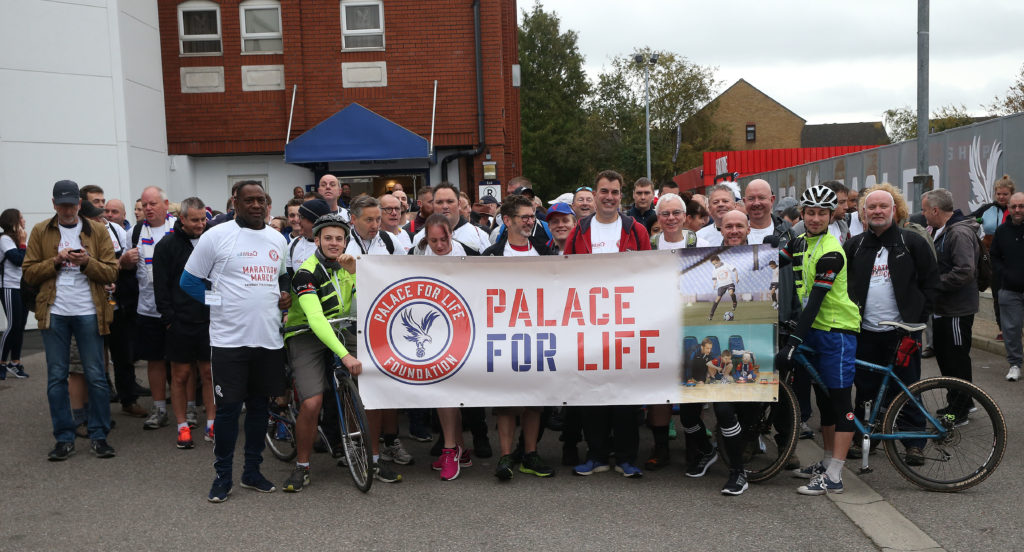 Palace goalkeeper Julian Speroni, who officially started the walk at 8am from Selhurst Park, said: “I’ve always been a supporter of the Foundation’s work, and the Marathon March is another fantastic event that can really make a difference to vulnerable people in our community.” 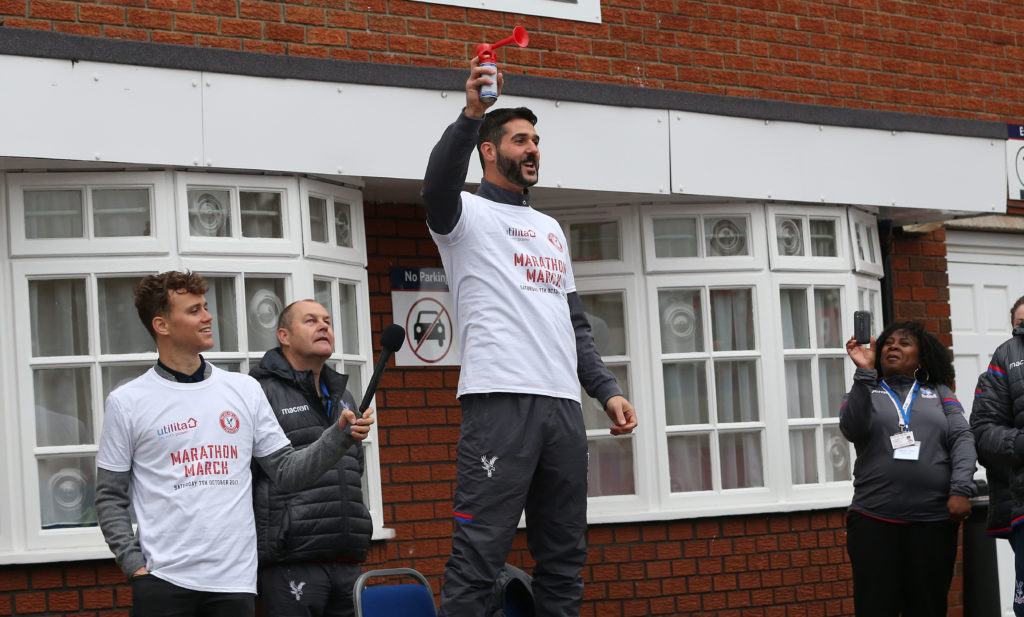 From Selhurst Park, the group set off across the capital, walking through Wimbledon Common and Richmond Park and taking in famous London landmarks such as Big Ben, even passing London rivals Fulham’s ground, Craven Cottage and stopping in at Chelsea pub, The Imperial, close to Stamford Bridge.

Andrew Johnson, who scored 85 goals for Palace during a four-year spell at the club between 2002 and 2006, walked the entire route to help raise awareness of the Foundation.

He said: “The fans were fantastic, it’s been a great turn out, I was talking to loads of them along the way and the atmosphere has been great.

“It’s not easy walking 26.2 miles, apparently it’s harder than running, it’s tough, but everyone cheered each other on and helped to pull each other through.

“It’s a huge donation for the Foundation that will be put back to help the youth of south London, it’s a great cause, so hats off to everyone who has taken part and helped to raise so much money.” 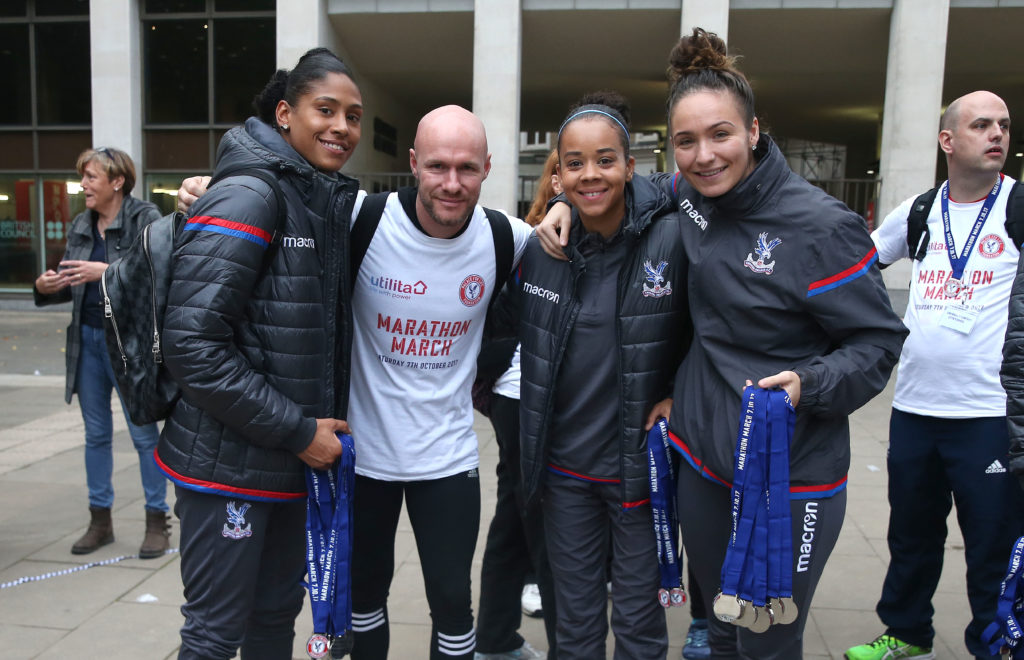 The Foundation has been working with the south London community for over 25 years, helping young south Londoners by giving them a chance to find a better path, using the power of sport.

One of those youngsters is 10-year-old Nadal Hanif, who plays for the Crystal Palace Powerchair Football Club. Nadal and his father, Zahid, turned out to support the walkers.

Zahid said: “When we had Nadal’s diagnosis of cerebral palsy, we knew we wanted to get him involved with football, so when we learnt about powerchair football, it was incredible and we’ve been embraced from the beginning.

“Just because a child is in a wheelchair, it should not mean that they are not able to be involved in sport, and that is one of the things the Foundation is amazing at, they raise money and find areas where there is a need for support and allow people to participate.”

Palace for Life Foundation CEO Mike Summers, who also walked the 26.2 miles, said: “It was such a special day and we are absolutely delighted to have more than doubled our original fundraising target, thanks to the tireless work of our fundraisers, our generous donors and our sponsors Utilita.

“This support is vital to continue our work in the community, where we are focused on helping the most in-need young people in south London, who we want to thrive and grow and get the best opportunities in life.

Palace for Life Chairman Ed Warner added: “It was an uplifting day, walking alongside over 100 Palace fans, all from different parts of the community, to come together and support the work of the Foundation.

“This money is so important for us, we can do fantastic things with young people in south London and help to improve their lives, which is what the Foundation is all about . We need more events like this to raise our profile, hopefully next time we’ll have 200 or 300 fans with us.”

Lifelong Palace fan and comedian Kevin Day undertook the Marathon March along with his colleagues from the Five Year Plan Fanzine.

He said: “It does your heart proud to be walking with so many Palace fans and supporting such an important cause. The atmosphere has been great and it was lovely to be waved off by Julian in the morning, he’s got the nicest smile in football!”

Five miles from the finish line, walkers were surprised by Palace Chairman, Steve Parish, who joined them to walk the final leg. 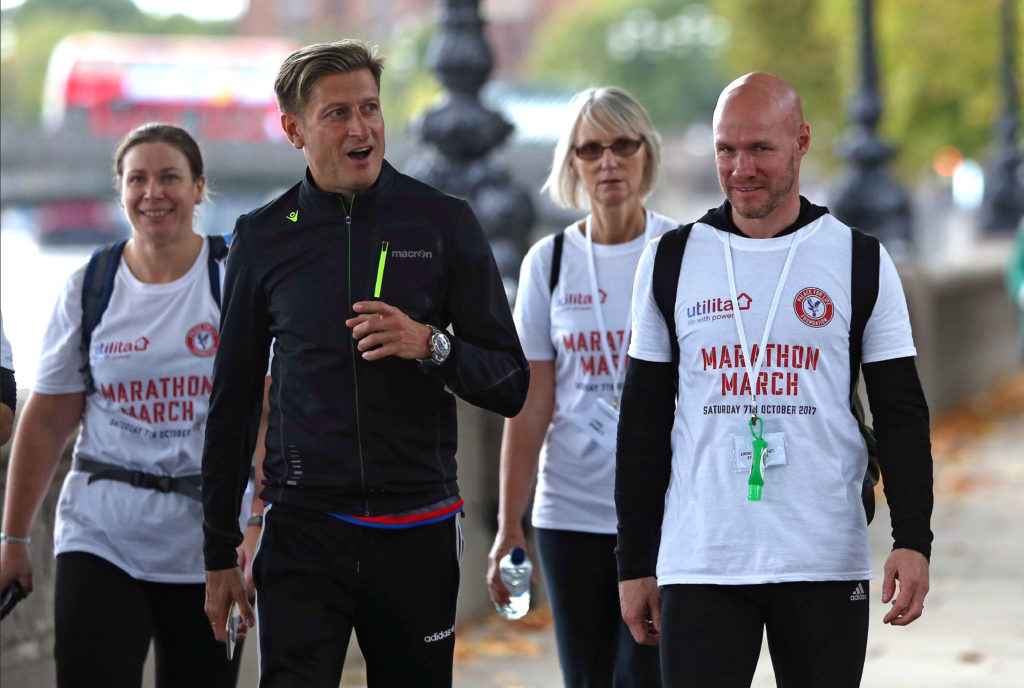 Speaking at the end of the March, Steve Parish said: “The Foundation is a fantastic force for good for our football club, and the March shows everyone what we are all about.”

The first walker over the finish line at Admirality Arch was 18-year-old Angel O’Dwyer, a former participant on a Foundation Youth Programme who now works as a volunteer coach.

She said: “It was so nice to socialise and talk to people along the way. Everything the Foundation does is so important, it was brilliant to see all these people out to support us.”

There is still time to support the Marathon March by visiting the link below, or you can donate £5 by texting ‘CPFC17 5’ to 70070.

Want to join the Marathon March next year? If you are interested in the March or other fundraising events organised by the Foundation, please contact admin@palaceforlife.org using the title ‘Marathon March’.