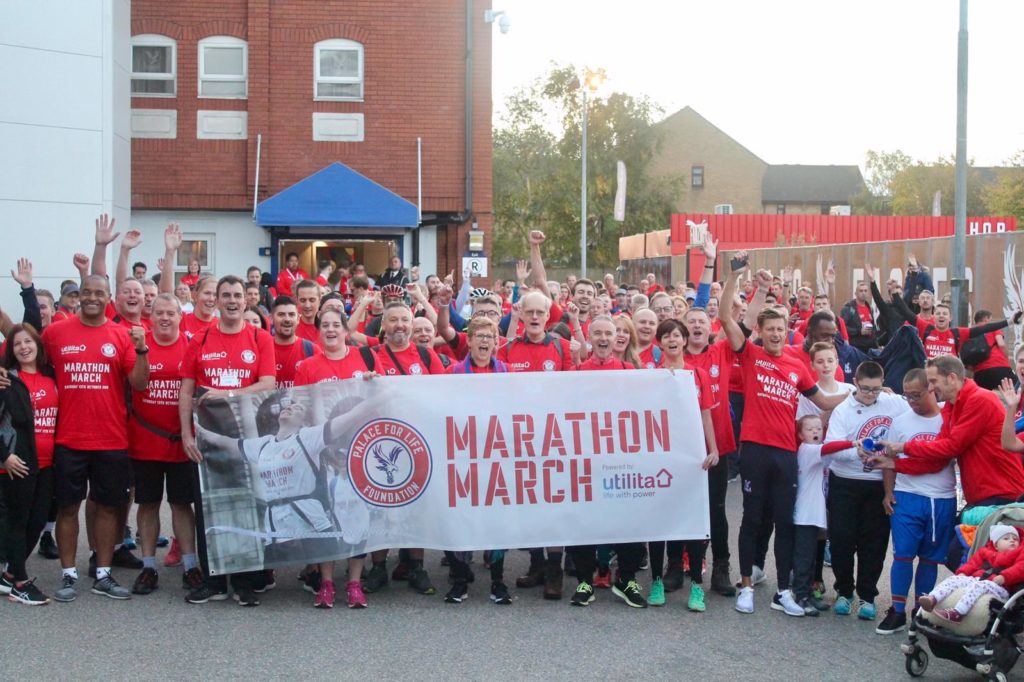 The Marathon March, powered by Utilita, starts at Selhurst Park

Steve Parish, who started walking at 8am from Selhurst Park, said: “I’m so pleased to be here, there is so much positivity around, with loads of money being raised for a good cause. It’s been fantastic and reminds you what a football club is all about for so many people.

“The Foundation is growing and doing so much good work in our community, reaching out to so many young people and making a difference to their lives.” 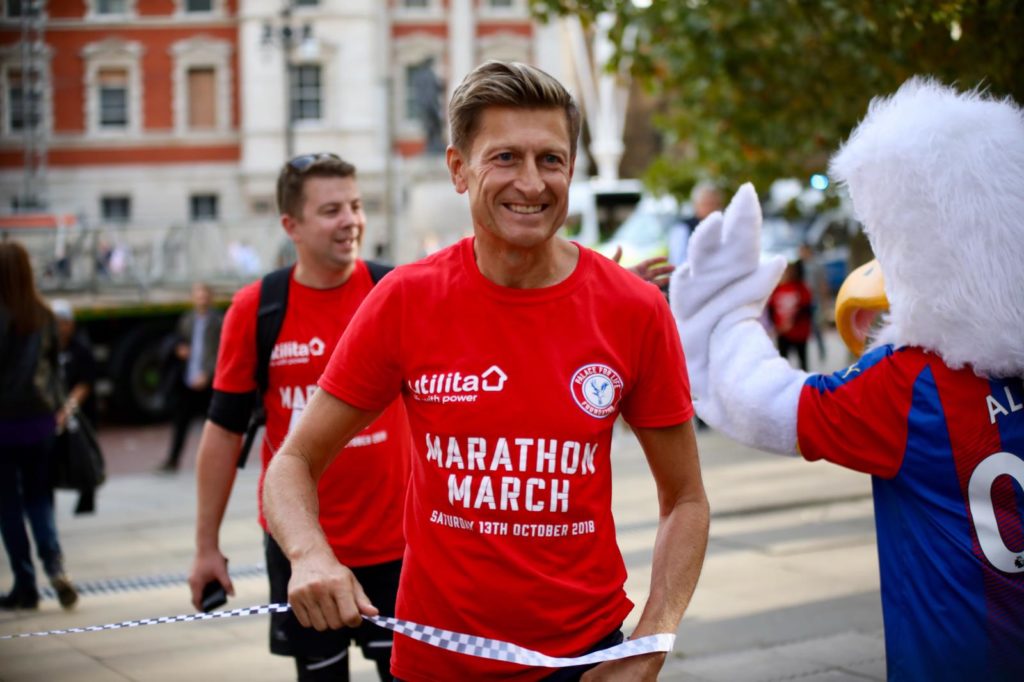 The Marathon March set off from Selhurst Park, travelling through Wimbledon Common and Richmond Park and taking in prestigious landmarks such as the London Eye, even passing London rivals Fulham’s ground, Craven Cottage and stopping in at Chelsea pub, The Imperial, close to Stamford Bridge.

The Foundation has been leveraging the power of sport and the Palace brand for over 25 years to help give young south Londoners the opportunity to find a better path in life.

One of those youngsters is Joshua, who plays for the Foundation’s Down’s Syndrome team and joined some of his team mates to walk the first mile of the walk.

His father Jason Vine, who walked the whole 26.2 miles, said: “It was harder than I was expecting but incredibly fulfilling, my son plays for the Down’s Syndrome team which is why I felt it was so important to play my part in helping to raise the profile of the Foundation.

“He’s been playing with them for three years and at first it was to help him get a bit fitter and so some more exercise, but the wonderful side effect is he’s picked up so many new friends along the way and has had the chance to play against other teams, like Arsenal.

“He was there at the start of the March and walked the first mile with me and he’s here to cheer me on the end, I couldn’t wish for a better sight at the end.” 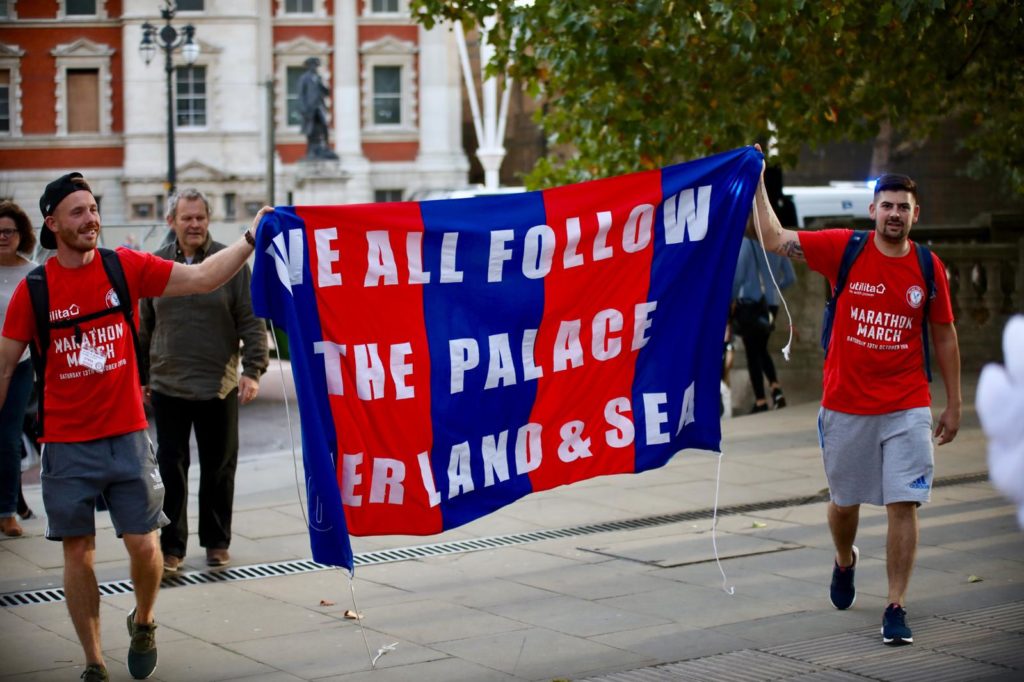 Palace for Life Foundation CEO Mike Summers also walked the 26.2 miles. He enthused: “I didn’t think it would be possible, but I think it was even better than last year, it was an absolutely brilliant day.

“We support over 13,000 young people each year through everything from our work in Primary Schools, to our disability football teams, to helping young people who are struggling to get into employment, the money we have raised today is absolutely vital to keeping that going.”

Walking the Marathon March for the second year running was 19-year-old Angel O’Dwyer, who was referred to a Foundation programme when she was younger and now works full-time as coach, helping other young people who are experiencing a difficult time.

She said: “This isn’t just a football club, this is a family. There are a lot of young people out there in south London in the areas we work in who just don’t get the opportunities that are there for them, so with every little bit of money donated today we’re able to put on programmes and activities to help get them on the right progression path to a more positive future.” 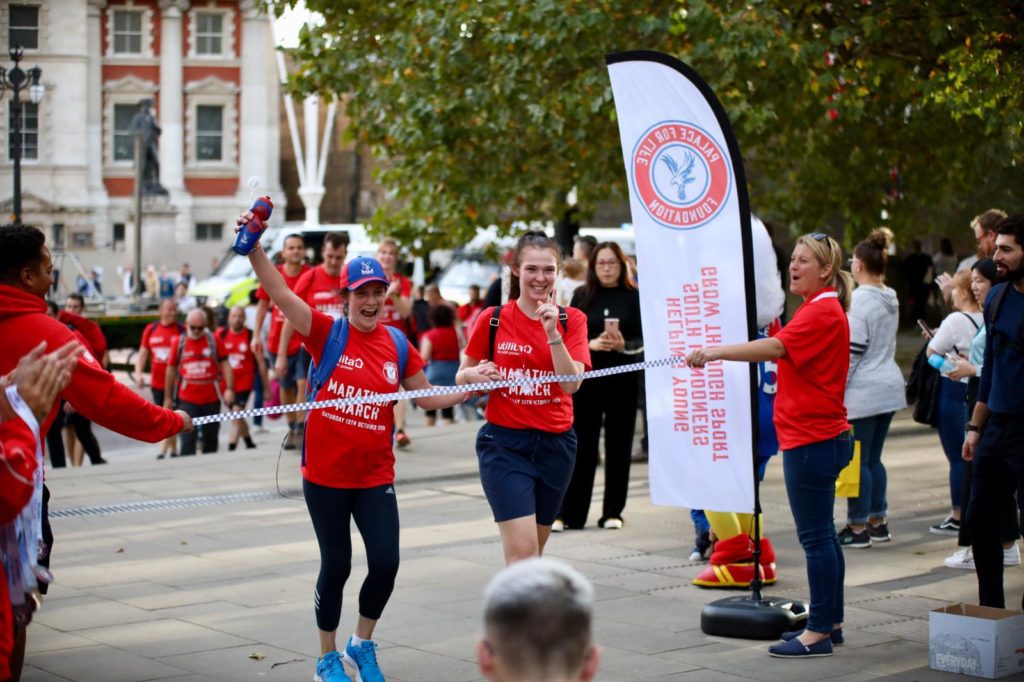 One of the first walkers to cross the finish line was Paul Price, he said: “I’m very proud to be a Palace fan anyway, but an event like this is just brilliant, it brings everyone together, with amazing camaraderie and it’s all for such a great cause, helping youngsters in south London, what’s not to love!”

The Palace for Life Foundation Marathon March was powered by Utilita Energy.