A group of Palace fans ran the Brighton Half Marathon in Palace kit to raise money for Palace for Life. Season ticket holder Rebecca, who came up with the idea, told us how they got on. 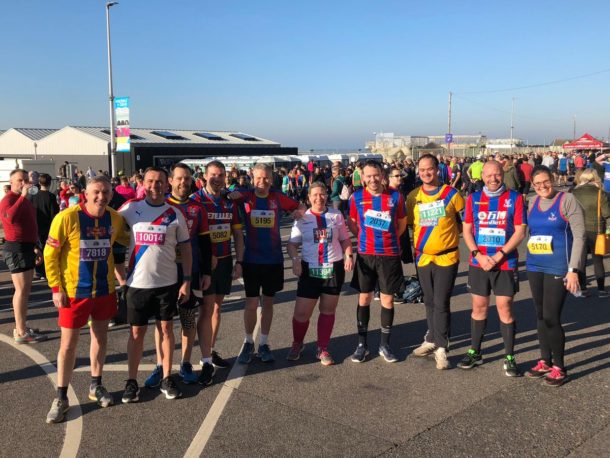 “The run up to the big day was busy with organising meet ups and making sure everyone was ok. One of the biggest decisions to make was which Palace shirt to wear! I had a few niggles myself with tight calves which almost caused me to pull out injured. A few runners were not able to run due to injuries which was a real shame.

The night before the normal ritual of a race is to do a flatlay and get your race kit ready. This helped get my head ready for the race itself and I knew I had all the kit I may need.

The morning of the race dawned, overnight oats were consumed, glitter was applied and we were ready to go. We had a great meet up with all the other runners, photos were taken and nerves were kicking in. 11 runners arrived for the photo which was great, another two were running late due to no trains! We had seen the Brighton Foundation tweeting good luck to their runners so we knew we may see some runners in Brighton shirts… let the banter begin.

The weather was lovely and warm which made the race itself bearable. The banter out on the course was great, a few seagull chants were shouted out but all in good nature. We saw two Brighton shirts during the race, Palace certainly out-numbered all the Brighton runners that’s for sure. The race went along Brighton seafront and lots were out supporting. There were a lot of Palace supporters out offering cheers to get you through. Whenever it got tough the thought of who we were running for (the Powerchair team) made you stop and dig deep to get to the finish.

Every runner that started, finished the race, and we all had the biggest smiles of relief and elation of what we had completed and achieved. The medals we earned were for not only us but the Powerchair team to help and support them.

Getting a video message from Joel, one of the Powerchair players, during the race certainly helped bring it home the importance of what we were doing and how it supports children like Joel to participate in football. Every child should have the opportunity to play football and by donating helps and gives all children the chance to play.

We would love to do this yearly to support the team and to challenge other foundations to see who can raise the most money for their teams.”

We’d like to thank Rebecca and all the runners took part to raise vital funds on the day, include our CEO Mike Summers!

There’s still time to donate to the group by visiting www.justgiving.com/fundraising/doingbitsforpalace