Palace for Life Foundation Director of Community Development Soye Briggs was last night (8 November 2017) recognised for his contribution to the community at the 2017 Football Black List Awards. 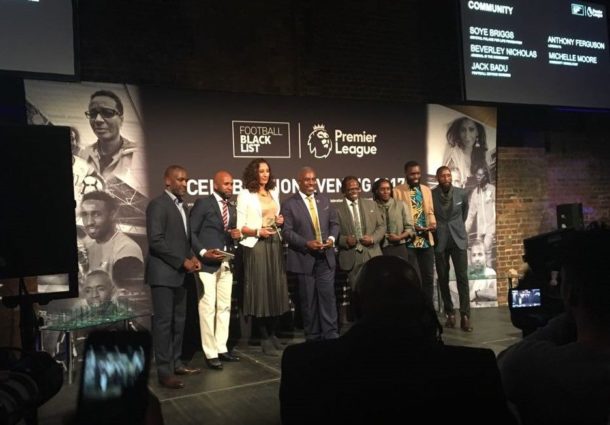 Heavily involved in promoting diversity within football, Soye is the Foundation’s Equalities and Inclusion Lead and was also appointed as the first black director of Surrey County FA in 2015, a role which he undertakes in his own time.

Soye has worked with the Foundation, the official charity of Crystal Palace FC, for over four years and was previously Head of Operations at Fulham FC Foundation.

Speaking after receiving his award, Soye said: “It feels great to be recognised for work that we do in the local community, helping young people to reach their aspirations with a view to having a better life.

“It’s all about having an impact, working with a club that is passionate about young people across south London.

“Nothing can be achieved in isolation, you have to have a good team around you to succeed, and I certainly have that.”

The Football Black List is an annual event that was started in 2008 by sports journalists Leon Mann and Rodney Hinds, and highlights the work of influential black figures within the football industry in order to inspire future generations to take up important roles. It is supported by the FA, PFA, Premier League and Kick It Out.

Award categories on the night included coaching and management, administration, media, commercial, community and practitioners. There were also special awards, including the Ugo Ehiogu One to Watch, in tribute to the late England and Aston Villa player.

Speaking about the importance of positive black role models in the local community, Soye added: “When young people are asked who their role models are, they often look to celebrities, but what they really need is people who are down-to-earth and represent something that is within their reach.

“People like myself have a big responsibility to behave in a certain way so that young people can look to me and see that if I can do it, so can they.

“Part of our role is to support them in that process, supporting them, mentoring them and constantly feeding them with positive messages and instilling in them that they can make it, rather than some of the negativity they might be picking up elsewhere.

“Consistent, positive messaging over a period of time, can change the direction of a young person’s life.”

Also honoured at the event were Crystal Palace FC’s first team coach Steven Reid, who was a winner of the Coaching and Management award.

Palace for Life Foundation’s Deputy CEO, Donald Forde, is already a member of the Football Black List, having been recognised in 2016.