Palace for Life at the Everton Match

Saturday the 27th of April will see a heightened Palace for Life presence at the penultimate home league game of the season against Everton. 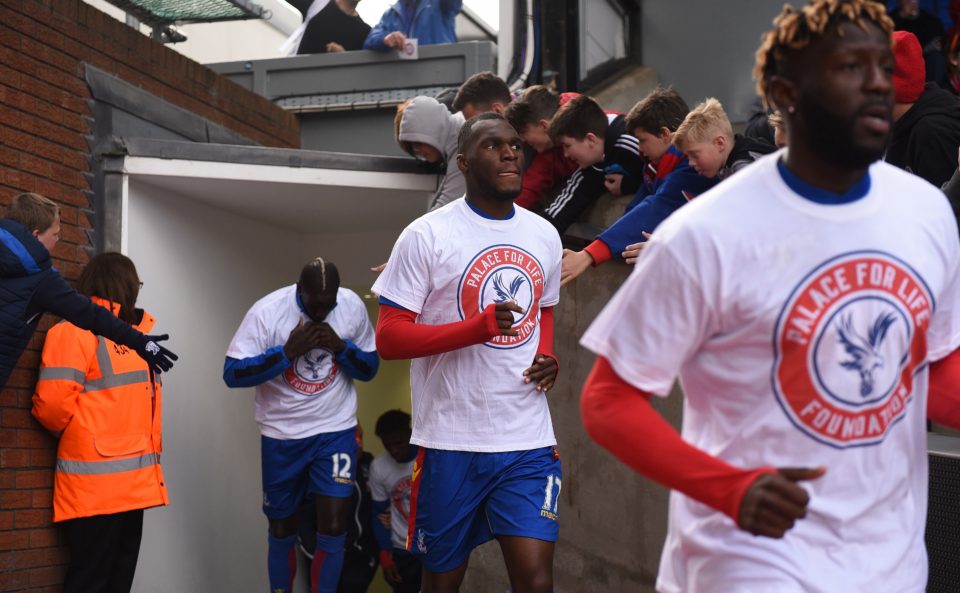 We’re highlighting some ways in which you can support Palace for Life Foundation and your local community, and you may see some of our participants around the stadium before the game or watching from the stands, feel free to say hello if you see them!

Refugee Game
On the morning of the fixture, a team of young refugee players representing Everton will take on a Palace for Life side in a friendly six-a-side fixture, before both teams head to Selhurst Park to watch their respective clubs face off in the Premier League.

The game is to celebrate the contribution refugee players make to the game, as part of Amnesty International’s Football Welcomes campaign. The game also forms part of the Foundation’s partnership with Croydon Voluntary Action who, along with other community organisations, have launched the new ‘We Stand Together’ project funded by the Mayor and Comic Relief.

The Eagle Swoop is a high energy, Palace-centric song performed alongside easy-to-copy dance moves that other youngsters will be encouraged to learn in a bid to get them active.
We have invited the stars of the video, 10 pupils from a local primary school, to watch the game and perform in the Fanzone during the pre-match build up.

On filming the video Ciara Watling said: “They [the kids] were really professional, I was a bit shocked! There was one kid who was amazing at dancing and he’d say, ‘no, stop, what you’ve got to do is…’ He was literally like a teacher, I was embarrassed and had to say, ‘sorry, I’ll make sure I do that next time!’ It was really fun. He was only about seven-years-old and putting me in my place!”

Make sure you come along to watch the dancers in action, at 14:30 in the Fanzone!

Powerchair Team
Palace for Life’s Powerchair team has been invited to attend this Saturday’s game fresh off of the back of winning their first ever competitive points!

Earlier this season Super Draw players helped to fund three brand new powerchairs for the team, and some of the team will be at the game to thank Eagles fans for their generosity.

Cheerleaders
There’s a group of promising Under 16 year old cheerleaders who have been training hard for the past year as part of the Premier League Kicks programme, they have also been taking their coaching qualifications and one of them was awarded the Jack Petchey Achievement Award.

Weather permitting they will perform a routine in the Fanzone before the game at 13:30. You won’t be able to miss them in their Palace for Life t-shirts, make sure you get down to watch and support them should you get the chance.

Players in T-shirts
If you catch the match day warm up you’ll see the first team players kitted out in personalised Palace for Life t-shirts. We’re proud to be able to work closely with the Palace players, where they continue to support the Foundation and the local community through a variety of events.

Before the match they will each have their own initialled Palace for Life t-shirt, which they will be donating to the Foundation. Ensure that you keep an eye on our social media channels and website for your chance to get your hands on one.

Super Draw
Support Palace for Life whilst being in with the chance of winning £2,000 and exclusive Palace prizes. Like every home game we’re running the Super Draw where fans can buy a ticket with their chance to win £2K at half time of every home match.

By playing the Super Draw you’re helping to fund our projects throughout south London, aiming to help improve the lives of local young people like our Power Chair team, whose three new chairs were funded by Super Draw players.

This week you’re in with the chance to win £2,000, a Crystal Palace Shirt signed by the 2018/19 squad, and for a limited time all online players will be entered a draw to win two season tickets for the 2019/20 season. Play at the stadium on Saturday, or play online here.

Play with Legends
This weekend is your final chance to bid for the opportunity to Play with Legends at Selhurst Park in May. Line up alongside Neil Shipperly, Bobby Bowery and Dean Austin kitted out in the Palace away strip in front of the beer festival crowd.

There are now only limited places up for grabs, with the auction finishing on Sunday. If you want to bid, click here.

Donate
If you would like to donate to Palace for Life Foundation, you can set up single or regular donation here.

All proceeds go to Palace for Life, to help us to continue to improve the lives of young south Londoners.

To find out more ways to support Palace for Life click here. Keep up to date by following our social media accounts, @PalaceforLife.