Two friends who have been supporting Palace for a combined total of 85 years have won the £2,000 jackpot in the Palace for Life Super Draw. 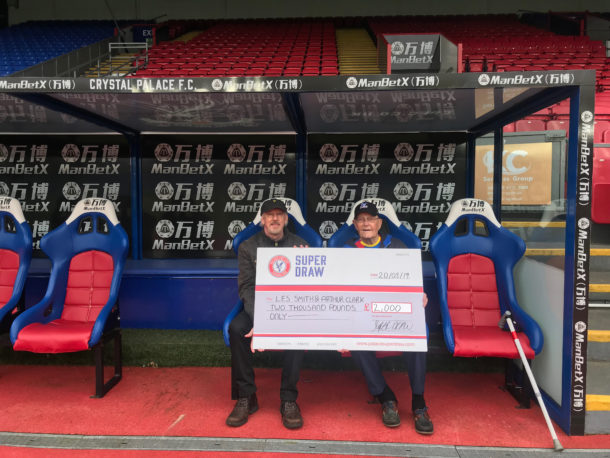 Arthur Clark, 97, and his friend Les Smith have been playing the matchday lottery at Selhurst Park for as long as they can remember, finally winning the jackpot prize at Palace’s game against Brighton on Saturday 9 March.

“We alternate between Arthur buying the ticket and me buying it, and it happened to be Arthur’s week and he’s very kindly shared the prize!” said Les.

Family friends Arthur and Les, who live in Beckenham and Carshalton respectively, both have season tickets in the upper Holmesdale and attend every game together, along with Les’ wife.

Les added: “I’m south London born and bred, I used to live in Thornton Heath when I was a little boy, so that’s when I started following the Palace.

“January 1958 was my first game, back in the old fourth division, we’ve had some great games down here since then, but probably the best for me was the 1990 semi-final against Liverpool, because no one thought we were going to win. That’s my favourite memory, along with winning the Super Draw!”

Proceeds from the Super Draw support Palace for Life Foundation’s work with young people in the communities around Selhurst Park and so far this season it has raised more than £37,000.

Amongst other things, this income has helped to buy three new sports wheelchairs for Crystal Palace Powerchair FC, helping the team win their first ever competitive points!

“I’m from around this area and there’s lots of kids that need that extra support, so I’m happy that we can help by playing the Super Draw,” Les continued.

With his winnings, Les will be buying his season ticket for next season, while Arthur has his eye on some home improvements: “I’m hoping to buy a new television, but I have to convince my wife first!”

Could you be the next Super Draw Winner? You can buy online or at the stadium in the build-up to the game – with our next matchday draw taking place at our home fixture against Huddersfield on Saturday 30 March.

A ticket is just £2 and signing up to the Super Draw online means you can enter every draw, even if you can’t make the match, where you are continuing to help Palace for Life Foundation support even more young south Londoners, whilst being in with the chance to win the jackpot of £2,000.

Win a pair of season tickets for next season! Online Super Draw players will be entered into an exclusive, free online draw.