Off licences and supermarkets across Croydon are to display posters publicising where domestic abuse victims can seek help, as part of a new awareness campaign.

The campaign will see posters detailing the contact number for Croydon Family Justice Centre and the free 24-hour domestic abuse helpline, put up in every one of the borough’s 400 off-licences and at supermarkets across Croydon.

The campaign is being run in partnership between the FJC and Croydon police and independent domestic violence advisors and police officers will be in Lidl stores from 10am-1pm on the following dates handing out leaflets and talking to staff and customers to raise awareness.

The supermarkets will also be offering safe spaces within their store, where those seeking help will be given access to a phone, where they can call for support and advice.

Police Safer Neighbourhood Teams will also be distributing posters around the borough to ensure as many residents as possible are aware of the help available and where to find it.

New statistics have revealed in the six weeks up to 19 April there were 200 domestic abuse arrests – almost five a day – in Croydon. The police were also called to 561 domestic abuse offences in the borough during this period – around 13 offences a day. 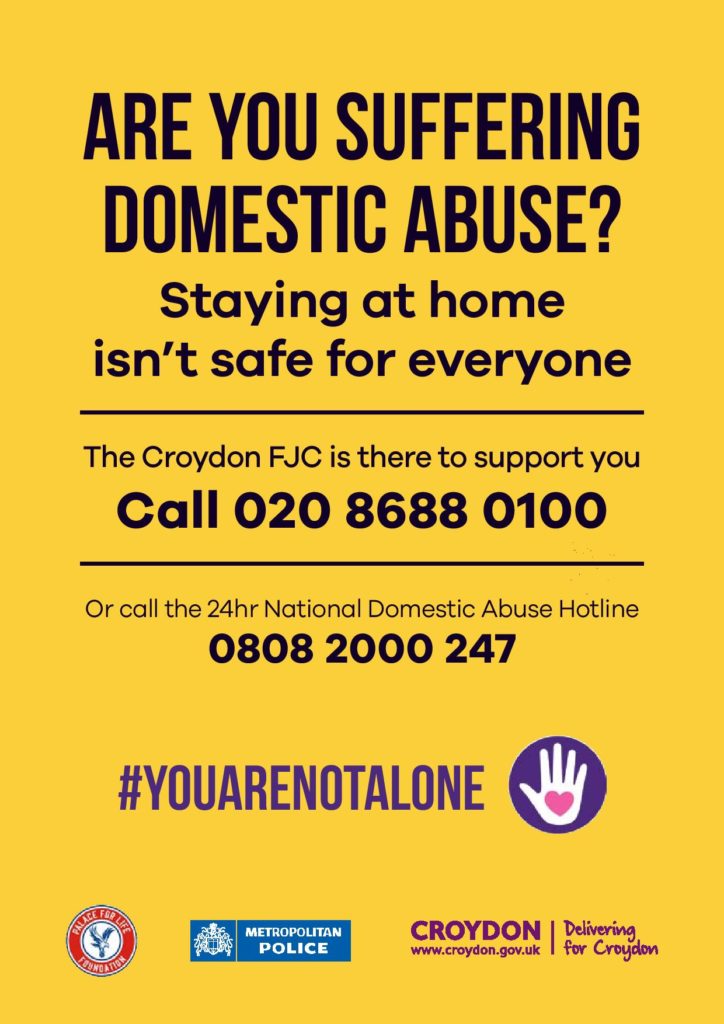 Croydon FJC team has increased its opening hours and is now providing a seven day a week service during lockdown to ensure week-long support is available to domestic abuse victims.

The team is there to listen and provide advice to ensure people are able to leave their homes if they are at risk and are also able to provide advice on housing and legal concerns.

Councillor Hamida Ali, cabinet member for safer Croydon and communities said:  “We know that survivors of domestic violence are more at risk during lockdown and that leaving home on safety grounds is permitted under the government rules.

“This new campaign is vital to make sure that anyone facing domestic abuse knows help is available in Croydon and where they can access it. It’s really positive that off-licences and supermarkets in the borough are working with us to help publicise this important message.

“The safe spaces will give survivors the time and space to access support when they may not be able to use their phone freely or reach friends for help. I would encourage anyone needing help to use them. The fact that the FJC is now a 7-day service also gives people more opportunity to access the help they need.”

The FJC doesn’t share its address publicly to help protect those using its service. If you need help, support or advice please call 020 8688 0100. Further information is available at https://www.croydon.gov.uk/community/dabuse/fjc

Those needing support outside of the centre’s opening hours can call the free 24-hour National Domestic Abuse Hotline on 0808 2000 247. In an emergency, call the police on 999.