We invited aspiring young journalist, Brian Matovu, down to experience his first ever Marathon March. Below, we hear his thoughts on the day.

On a dark Autumn morning at 6.45 am, I made the short walk to Selhurst Park from my house in Thornton Heath. When I arrived at the Wright & Bright Lounge by 7 am, I embarked on a queue of eager Palace fans registering their attendance as they prepared to tackle the Palace for Life Marathon March. Given that it was a Saturday, I was surprised to see so many people awake at such an early time in the morning during an international break where there is no Premier League football. But this was a special occasion, it was the Palace for Life Foundation’s fifth year anniversary of the Marathon March. A fantastic milestone for the official charity of Crystal Palace Football Club which raises money towards helping the next generation of south Londoners. 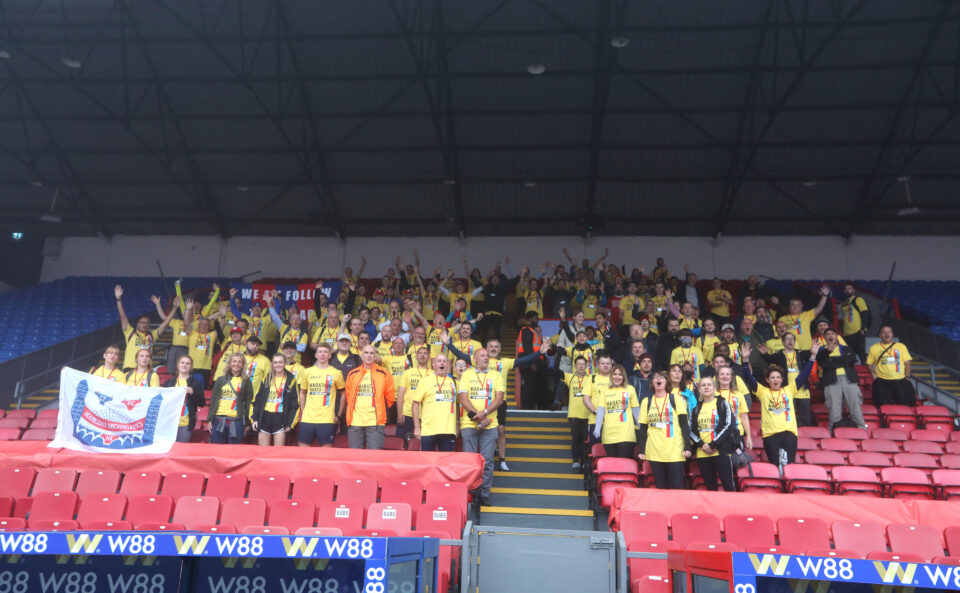 This was the first year that I’d attended the Marathon March. Unfortunately, I wasn’t taking part in the actual marathon but I was there as a volunteer. This included me setting up food at certain stop-off points and I also got the chance to conduct interviews with the marchers and help out on all things media related which was fantastic as that is a career path I’m keen to go down.

After the marchers had registered and eaten their breakfast, we were escorted into the main stand where we were quickly briefed on the dos and don’ts. As the brief concluded, we were told to look towards the big screen on the Whitehorse Road Stand, where a message from manager Patrick Vieira wishing the marchers good luck would play, but in the usual Palace style, the sound refused to co-operate. Despite the technical difficulties, the mood did not dampen and we then made our way to the gates on Holmesdale Road ready to cheer on the marchers as they were about to embark on the difficult 26.2-mile journey across south London back to the finish line at Selhurst Park.

As over 150 or so Palace fans set off on their journey, me and Palace for Life Fundraising Officer Bobby Webbe made our way to the first stop-off point which was Croydon Rugby Club. We got there so early that we contemplated if the marchers had gone off track. But, after about 30mins, the first batch of marchers came through the midst of the fog. Alongside Palace for Life Chair Ed Warner and Palace TV’s Chris Grierson, we clapped and cheered the ongoing marchers as they approached the first stop-off point for small snacks and refreshments.

During the short break, I took the opportunity to interview some of the marchers for the Foundation’s social media sites with a keen interest in knowing their motivations behind taking part in the marathon and why the Palace for Life Foundation is so important for the community. Just as the majority of marchers had got back on their journey, I took the opportunity to quickly pull former Team GB Olympic 400m sprinter Martyn Rooney aside for an interview. This was a special moment for me because Martyn Rooney and I went to the same primary school. Although he is 11 years older than me, I did still remember the times Rooney would come back to our school to encourage us to follow our dreams and never give up on our goals.

As we made our way to the second stop-off point at Kent County Cricket Club, the sun had cleared the fog and the blue skies gave the vibe of a warm summers day. At this point, Bobby and I conducted more interviews asking marchers how they were finding it at the halfway stage. Moreover, an influx of new marchers entered the venue as they had registered for the half marathon so I also got to grips with briefing them on what to expect for the second half of the marathon. Also, given that this stop-off point was adjacent to the first-team training ground, I could catch a glimpse of Ebere Eze doing shuttle runs through the gate as he nears closer to a return to first-team action.

The marchers headed off again and about a couple of hours later we reached the third stop at Crystal Palace Park where I bumped into the famous Holmesdale Knickerelastics. Standing out due to their stylish attire, I spoke to them for a few mins as they got ready for the final few kilometres which ended back where we started at Selhurst Park. Unfortunately, I did forget to ask where their name resonates from, but we’ll find that out next year! 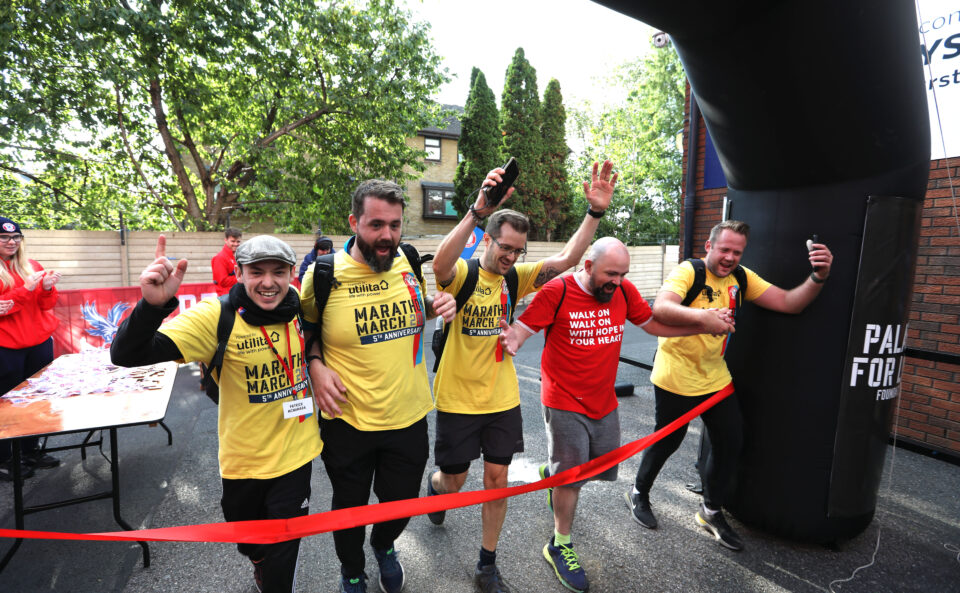 The final four miles of the marathon concluded back at the start where it all began at Selhurst Park. Seeing the relief in the shattered marchers’ eyes as they approached the finish line was a sight to behold. The Marathon was completed by Palace legend and ambassador Mark Bright, comedian Eddie Izzard (albeit in Canada), Olympian Martyn Rooney and around 150 or so loyal, dedicated Palace fans who raised over £100,000, a record for the event, which will go towards community programmes dedicated to the less privileged members of south London.

A big congratulations to everybody who took part in the marathon as completing 26.2 miles is by no means an easy feat. Sacrificing your Saturday to raise money for Palace for Life is a wonderful embodiment of the Palace fanbase that always take pride in their local community.

Finally, I’d like to give a huge shoutout to the Palace for Life Foundation for the amazing work they do and in particular Tash Stephens and Bobby Webbe for giving me the opportunity to volunteer on this record-breaking day.

To find out more about Palace for Life you can sign up to the monthly newsletter by clicking here.