This year we were joined by a team from Croydon Council’s Youth Disability Project, who work very closely with us at Palace for Life Foundation. Paul Funnell, who is Disability Lead Officer for Youth at Croydon Council, was walking for the first time this year, was kind enough to write a blog for us about how he found his inaugural Marathon March.

First, he introduced us to the team:

“Wayne and Luke Stevens aren’t even Palace fans. This shows their commitment to the cause, having done the Marathon March twice before with young people from Croydon’s Disability Youth project. We’ve worked in partnership with the Foundation for a number of years through our work with young people aged 8-25 with disabilities and autism and our team can see the benefit the Foundation’s work brings to young people in Croydon and south London.

“Dan Clarke was undertaking it for a second year. Dan has come through our youth project as a young person, a volunteer and is now a paid part time youth worker. He had major surgery less than two months ago and over the years has benefitted from sessions delivered by the Foundation. 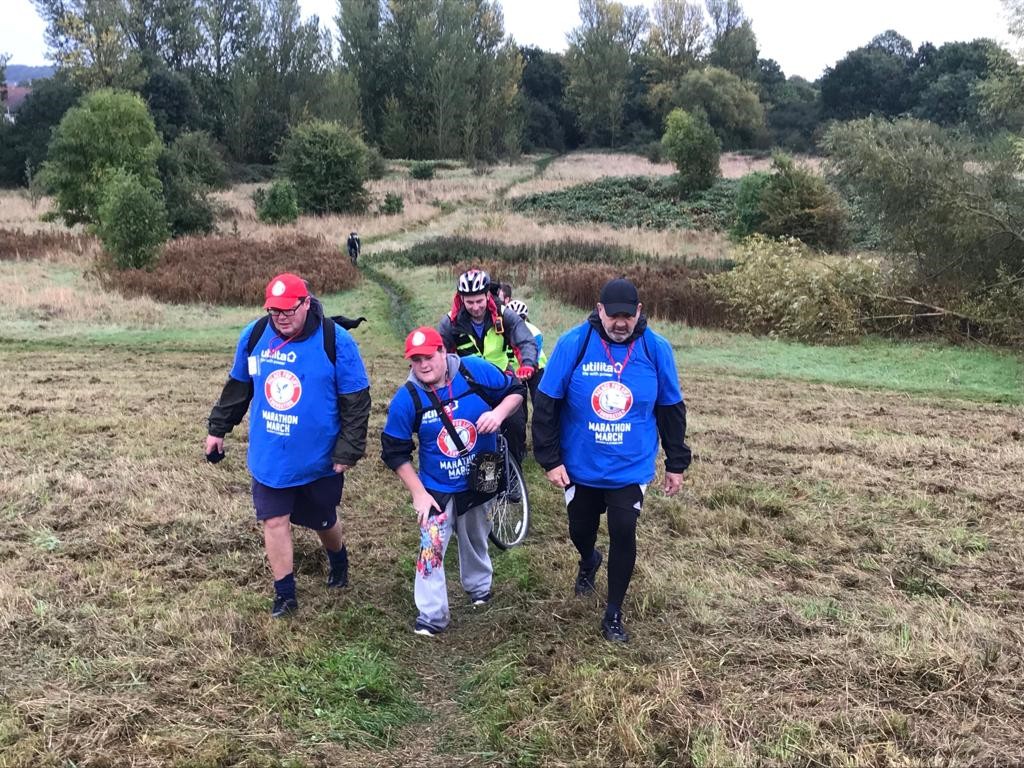 “A new young pace setter – Paul Funnell was brought in this year to help the Youth Project team beat previous year’s times! (tongue firmly planted in cheek with that comment!)”

Now that you know the team. How did they do? From road to path and waterproof to poncho, they can tell better than anyone…

“On the day we all met at Selhurst Park early for our teas and bacon butties.  The camaraderie started early as we met people we’d worked with around the borough and those who’d undertook it before, sharing stories of previous years.

“Paul began to work on his pre-marathon task set by his Palace supporting mates – as many selfies with ex-players and famous palace supporters as could be achieved. Four in total with the Eddie Izzard selfie winning hands down.

“We knew the forecast wasn’t good and as the rain started during the safety talk we knew were in for a wet one! 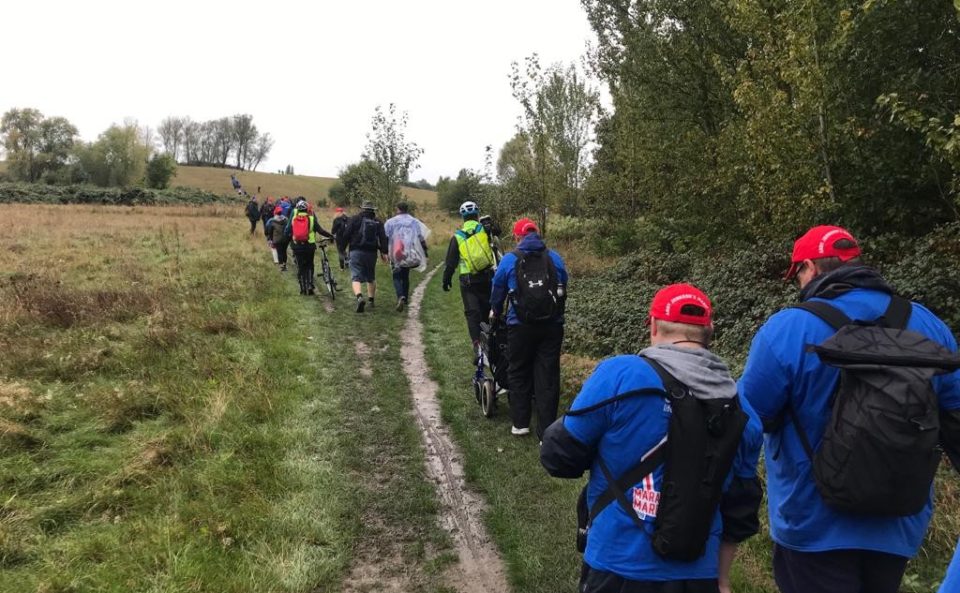 “Dan did his best from the outset and was determined to walk as much as he could, hitting the streets of Thornton Heath down to the pond, through and over Mitcham Common. Unfortunately, these early parts of the course where not wheelchair-friendly. Although it was fed back that the organisers had worked well to make the whole course more accessible than previous years and we were offered a support vehicle to take the chair around certain parts of the course. Of course, we didn’t take this, as finishing it as a team, chair and all, was massively important to us.

“Onto Wimbledon and waterproofs trousers were ditched by those who were wearing them. Not stream lined enough and slowed our progress!  The ponchos supplied by the Foundation came in handy, especially keeping Dan dry when he was in the wheelchair and his seat when he wasn’t. 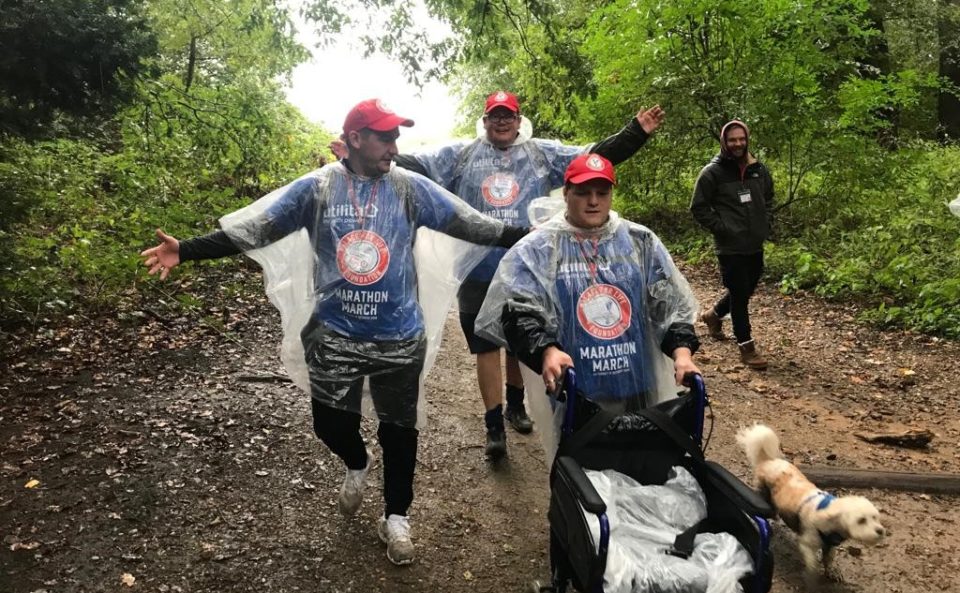 “Several times the Youth Project pace setters tried to shake Wayne but he kept us in his sights and always caught us up again.

“The Thames Tow Path was a highlight for all of us in terms of the views, and although we struggled on certain parts pushing Dan in his chair on the uneven paths we felt like we really caught up the middle group at that stage.  Low points were definitely the awful pavements around Knightsbridge and Kensington and the lack of accessible curb drops.

The weather didn’t dampen our spirits, in fact it brought us all together and made for a memorable day

“The weather didn’t dampen our spirits, in fact it brought us all together and made for a memorable day. Beforehand we were all saying never again but by the end of the day we were talking about next year and what young people would want to do it with us.” 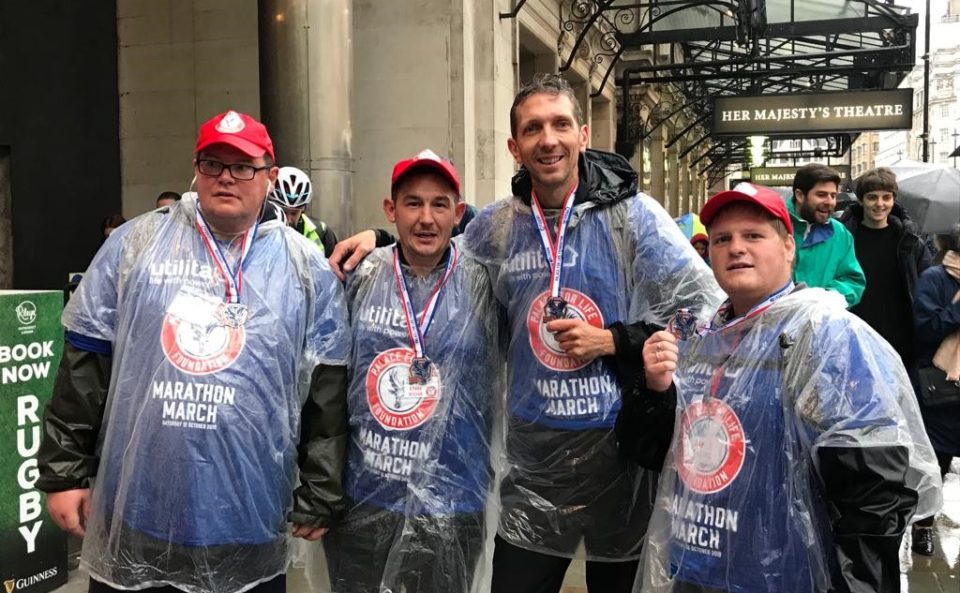 Everyone at the Foundation would like to congratulate everyone from Croydon Council’s Disability Youth Project on completing the Marathon March and we would like to thank Paul for his insights into the day.”

You can still donate to the Marathon March here.

Donate to this year's fund!

Donate to the JustGiving page to support the 2019 MarathonMarch, powered by Utilita.