A series of stories uncovered by Andrew McSteen on why people take part in the Marathon March and what Palace for Life means to them. 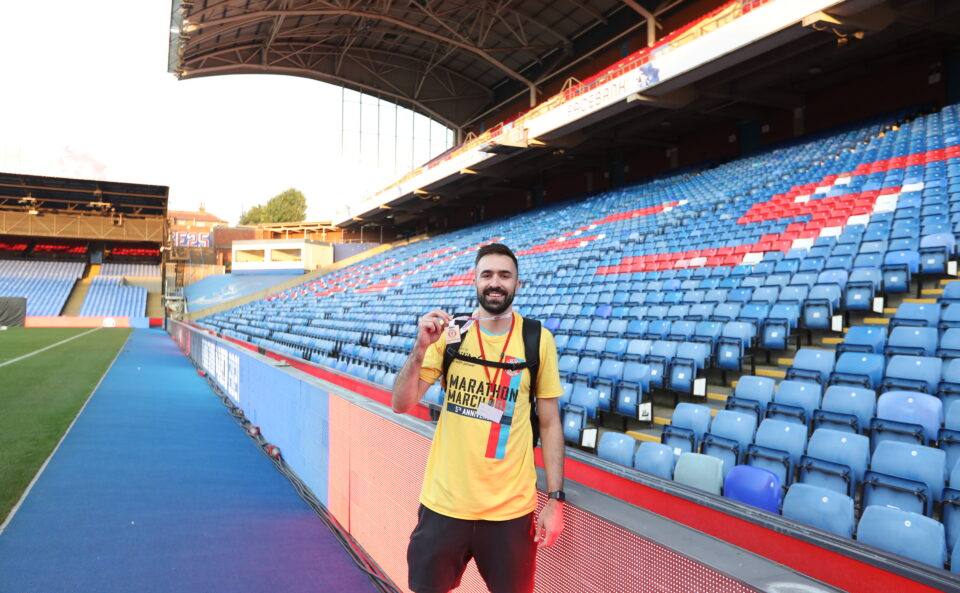 On why he is participating in the Marathon March:

“Palace is a club that means a lot to me as a fan, but also, the Palace for Life Foundation hits an area where I’m from. I’m from Thornton Heath. They’ve put a lot back into the area, and that’s something that when the opportunity came to actually help out and do something – it’s walking, it’s not impossible to do – it was great to finally be involved in something.”

On the areas he has been walking through:

“At the start, I was going through areas where I’ve done a lot of cross country (running) as a kid. It was very misty and mythical this morning. Now, we’re going a bit more further afield for me, so it’s kind of nice and the (Five Year Plan) guys are keeping me company and showing me where to go. It’s nice to come up to the up to the training ground and just see the building work that’s going on at the academy. This is what you want to see as a Palace fan, you want to see them reinvest in the youth, so it’s a nice pitstop (Kent County Cricket Ground in Beckenham, overlooks the new academy site).

“I’m a fan of the Marathon March coming back and finishing at Selhurst Park. That’s where the money is going. That’s the area where it’s going to be most needed. It’s nice to go back there, rather than finishing.”

On walking with the Five Year Plan group:

“They’ve adopted me. I’ve leeched onto the back of their group and they’re keeping me company.

“I’m a Palace fan. (But) I’m not someone who follows everything about the club. I’m hearing more and I’m learning more about what’s going on at the club every day. I also have my own opinions of what’s going on, but to hear it from people who are more informed, it’s nice to hear, nice to hear that people are actually excited about the club. We were saying it would have been easier if we were playing rubbish and we could all moan together. It’s nice that we’re all quite happy with how the club are moving forward.”

On being a Palace fan and helping to raise money for the Palace for Life Foundation:

“First and foremost, Palace can stand up and say it’s a community club. It’s a part of the area, the fans are from the area. Reinvesting in those people has been brilliant. As a Premier League club which doesn’t always get the positive news that it should really, but Palace have always given back to the local area.

“Thornton Heath is an area that is close to my heart – my parents still live there – so to see like people who are struggling and getting the opportunities that the foundation can give them to like get involved in sport is brilliant.”

To be the first to know about the 2022 Marathon March you can sign up to receive fundraising and events news here.