Last year, Palace super-fan Simon Hudson ran the virtual London Marathon for Palace for Life…all the way from his home in Switzerland. See why he ran 26.2 miles for Palace for Life and what tips he has for anyone thinking of doing it this year.

Hi Simon, how long have you been a Palace fan?

Since I was knee high! I grew up in Thornton Heath and first went to Palace when I was about 7 or 8 years old. Ever since then Palace has been in my blood. Since we got promoted, I decided to get a season ticket and go to all of the home games, all the way from Switzerland!

It has to be the 3-3 Liverpool game under the lights. The atmosphere was incredible. To be 3-0 down and to put their title win out of sight that was the night for me. Although even a 2-1 against QPR one night, that was a cracker.

How did you get involved with Palace for Life?

Probably in the last ten years or so. There are a couple of guys I know who have done the Marathon March for the last five years. I met them and they told me a lot about Palace for Life. Then last year, I wanted to try and contribute and help people in south London, my old neck of the woods, that’s where I’m from.

You did the virtual marathon last year all the way from Switzerland; how did it go?

I’d never run a marathon before and managed 35 kilometres of running which I thought was pretty good. I really enjoyed the whole process from beginning to end. I had to get my body trim, then I had to work out a route, and luckily, I had a friend who helped me out with that.

Covid restrictions meant I couldn’t go to the matches, so the marathon gave me an alternative and a nice distraction. Even trying to raise funds, posting on social media, talking to my friends and trying to get some sponsorship really gave me something to focus on.

Having help from my wife and goddaughter, was great too – they helped with the drinks stops! 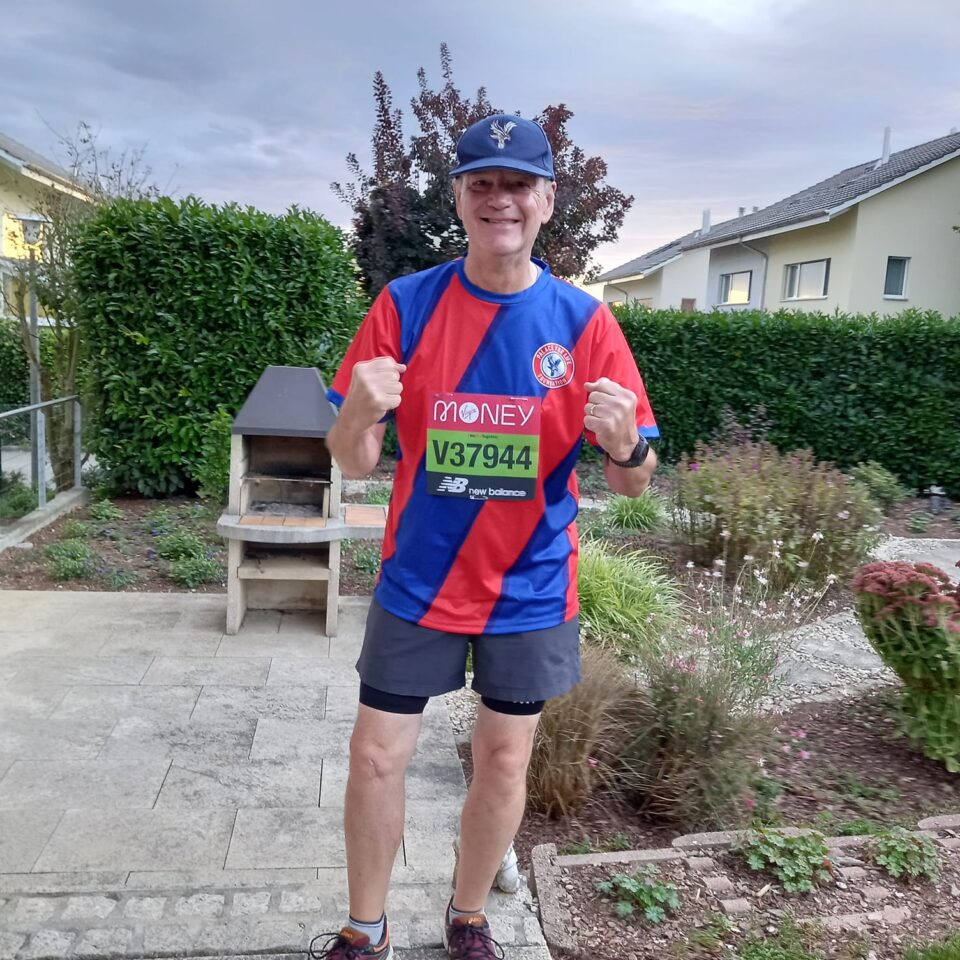 If you were to give anyone advice to anyone thinking about taking part, what would it be?

From someone who has never ran a marathon before, I would start the process as early as possible. Take care of your diet, get yourself some equipment to track how you’re doing. You’ve to persevere with it, set yourself some goals. Get some good shoes and socks!

As a Palace fan, how it did feel to representing Palace, running a marathon and running for Palace for Life at the same time?

I felt really proud that I was representing my football club, and I felt proud of myself to do the whole thing. I’m so happy that I actually did it and made it in the end! To raise the money, I was annoying everyone around the pub, trying to find all sorts of ways to raise money. Overall, I was very pleased and grateful for the support.

What was the support like from Palace for Life? How did it support you on your journey?

The support was great. All of the tips and ideas you gave me throughout the process was invaluable – the pressure shorts really did help! You gave me some ideas on how to raise money, and the flyers were really helpful because I could send those easily to friends and colleagues to encourage them to donate to the cause.

It was nice to talk about the cause to other people as well, especially in Switzerland, explaining to them was good fun.

What did you make of your running top?

I wore it at the FA cup semi-final! I love wearing my shirt, it makes me feel proud.

Guéhi for me. He’s been rock solid. Came in this season and I can’t see anyone getting him out of that position. He’s been fantastic for me. Conor Gallagher was also close!

Thank you for taking part in the virtual Marathon, Simon. You have helped raise vital funds that help us continue to support young south Londoners.

Palace for Life are looking for three dedicated Palace fans to run the virtual London marathon on the 2nd October this year. If you want to take part, you can register to apply here (registration closes on the 24th June).

Apply to take part in this year's Virtual TCS London Marathon and represent Palace for Life.