Shukhan is managing his issues with help from the Foundation

As one of the many adults who have experienced low levels of mental health, Shukhan (Shaka) Scanlan, from Croydon, is managing his issues with help from the Foundation.

Shaka grew up in Norwood, and loved playing football when he was younger, with his mum taking him to Pelo FC in Dulwich. Here, he enjoyed the little tournaments and went on to play for one of their League teams. Shaka went to school in Gypsy Hill, which he really liked and then after school went to study at Bromley College. However things started to take a turn for the worse around this time and Shaka dropped out of college pretty quickly. 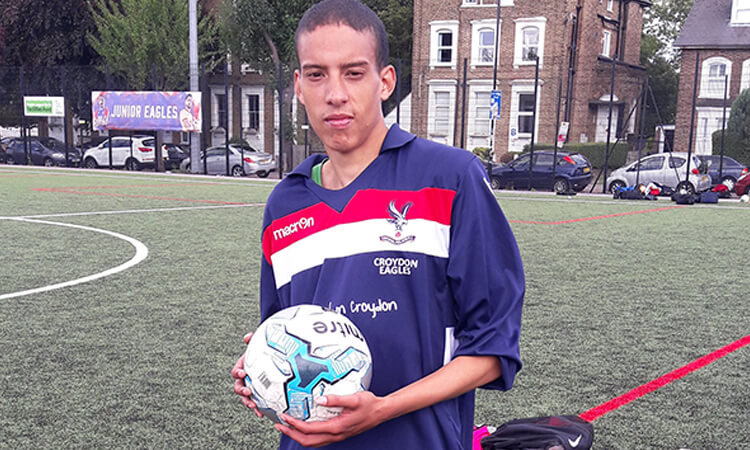 He began to experience “sadness and bad dreams” which has taken his focus away from his interests. Shaka began to spend more and more time at home and the bad thoughts continued to grow. His sister helped Shaka to get in touch with Mind In Croydon, a mental health charity founded in 1967 that has developed into a significant provider of mental health services in Croydon. Mind very quickly suggested that Shaka join the football programme that the Palace for Life Foundation supports for adults who have experienced low levels of mental health.

Thinking back to his first day with us just over a year ago Shaka says he “liked it straight away. I liked being active and the boys were all good to me.” Now a regular member of the group, Shaka thinks the best things about coming to the program are “the matches we play in training every Wednesday, the league games we play and the camaraderie amongst the players.” Shaka does see some of the other lads in Croydon outside of these sessions from time to time, but he is happiest just coming and playing rather than trying to make a new group of friends.

Shaka acknowledges that coming to our football sessions has made a positive change to his life. He now also plays for the mental health football team that has grown out of these weekly training sessions, the Croydon Eagles. He says: “Getting active, getting out and doing things is good for the mind. It brings back good memories of when I used to play. I feel fitter and stronger and am improving again, trying to get back into playing.” If he was not involved with the programme and the Croydon Eagles, Shaka states that he would “probably be at home, not doing anything” which he believes does not help him maintain good mental health.

Things are still not easy for Shaka but he knows that these sessions are helping him do things that he thought he couldn’t do anymore. “I really look forward to coming every week.” he says. When asked if he would recommend this to anyone else who is experiencing mental health problems Shaka suggests that anyone interested should “come along and see it for themselves.”

Disability Manager Michael Harrington, who runs the weekly football sessions at the Crystal Palace National Sports Centre, offers the following insight:“Shaka was very quiet when he first came to us, and he still can be today. It was clear from day 1 that he had a great touch but his fitness levels and strength were low, leaving him struggling at times to keep up with others in the group. However attending regularly, and working hard when he is with us, has brought these levels up remarkably and he now can train and play for two hours straight through without the need for additional breaks. It is not just the football side that we aim to focus on, the social side of programs like this are equally as vital. This was highlighted to us when Shaka continued to come to recent training sessions even when he was out injured with a fractured wrist so he could see what was going on and to feel part of the group. His wrist is now healed and he is back doing what he loves the most – playing football!”