Palace for Life Foundation coach Pam McRoberts shares her story of how she was inspired to play football, and the lifelong friendships she has made along the way. 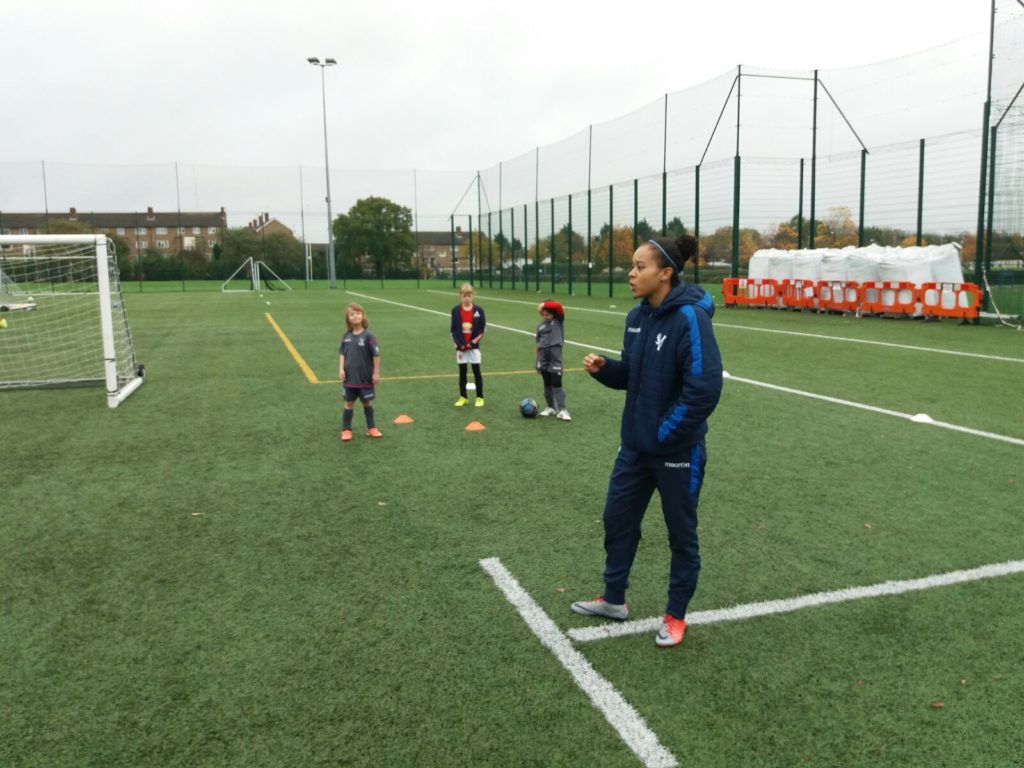 Born within a five mile radius of one another and spending their childhoods playing football on the streets of south London, Pam McRoberts, Gemma Bryan and Ellie Stenning did not know it at the time, but one day their mutual love of the game would bring them together as team mates and also, close friends.

“Growing up on the estate, all the kids used to get together and play football, that’s just what we did,” explains Gemma Bryan, who was born in Greenwich and is now top scorer at Crystal Palace Ladies FC.

“Your mates would come and knock for you, that was our way of networking, we didn’t have social media!”

Gemma’s Palace team mate, Ellie Stenning, recounts a similar experience: “I grew up between Sydenham and Forest Hill with a lot of youngsters around me, there was a football pen on the estate that we all used to play in, my brother was a footballer too, so that helped.”

Football is officially the biggest female team sport in England and according to the FA, last season over 147,000 female players competed in affiliated league and cup competitions.

However, there is a long way to go before the path to playing is as smooth for women as it is for men.

“There was the odd girl playing, but it was mainly all boys, I never knew any different, but then you reach a certain age and they tell you that you can’t play with the boys anymore. When I got to about 12 or 13, I had to start looking for a female team,” says Gemma. 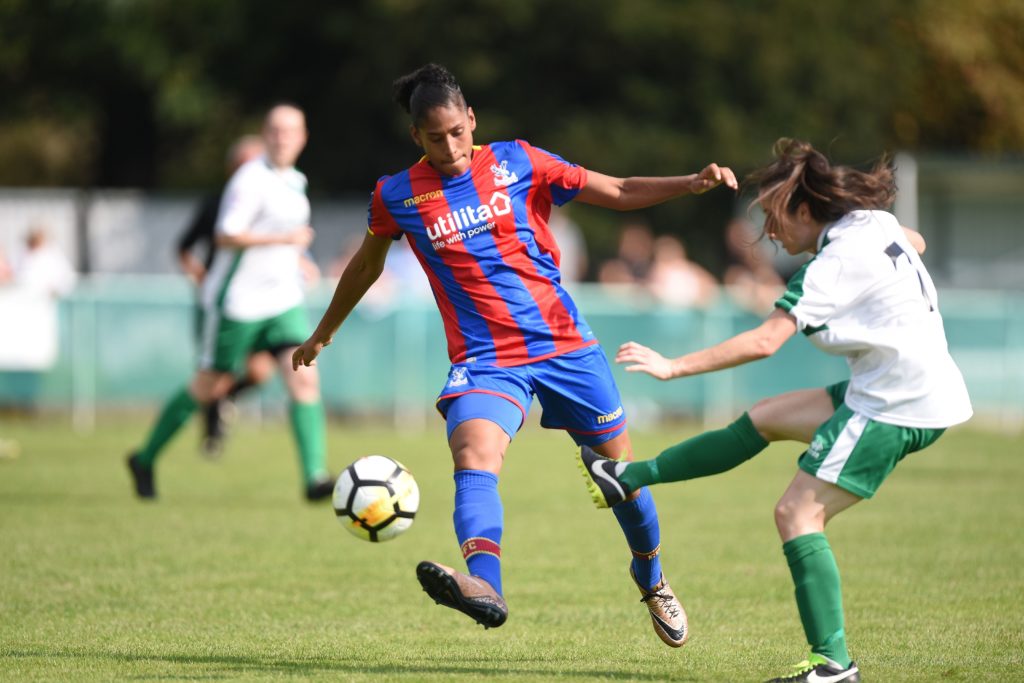 For Pam McRoberts, growing up in nearby Peckham, the hurdles were closer to home.

“I started playing when I was seven, but my mum worked so she couldn’t take me to training. By the time I turned 16 it got easier, I could take myself and I joined a team.”

Pam quickly realised her potential and spent four seasons at Millwall, where she played alongside Ellie and Gemma, who she had met previously at college.

“We’ve all got the same goals, the same lifestyle, we all grew up in south east London,” Gemma says when asked about the strong connection the three women have.

It was around this time that things changed. Pam, who had moved to play for Charlton, had her first child and took four years away from the sport.

She describes the struggle of finding the time and motivation to return:

“It was really hard, being a single mum and having to think about training and playing on a Sunday, I needed help to look after my child, and that was holding me back a bit.”

Pam’s love of football and drive to get back on the pitch saw her join Crystal Palace in 2015, but she did not do it alone. Pam encouraged her friends Gemma and Ellie, who had both suffered serious knee injuries, to join her and the three of them supported one another as they returned to form and fitness to thrive in the Palace first team. 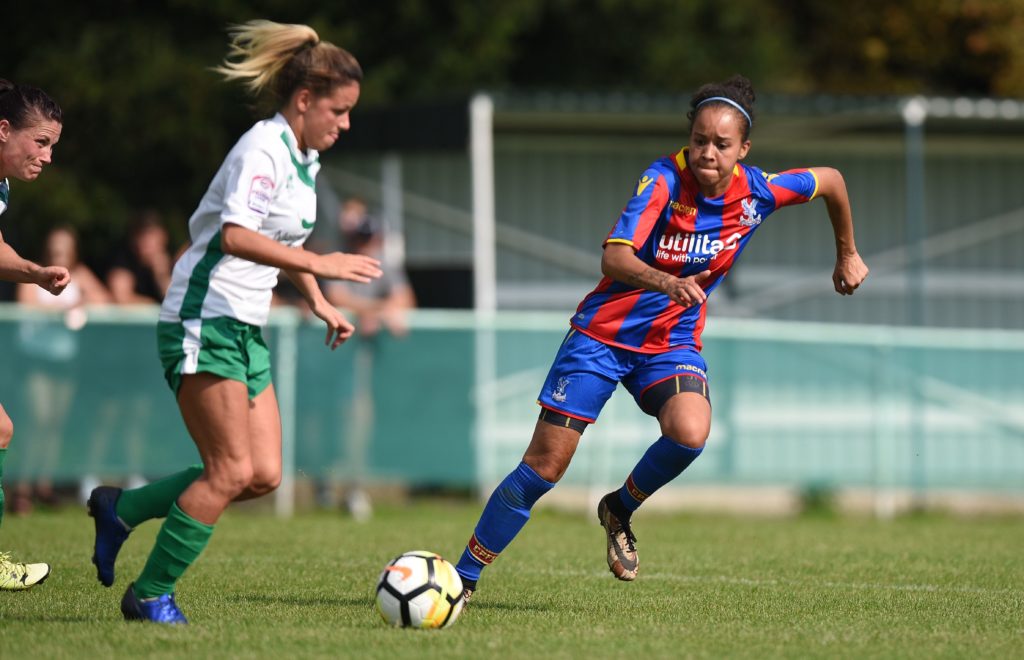 “At Palace, I was playing with girls I’d played with at previous clubs, so it was nice to have a good reception and positive feedback in training which gave me a real boost,” Pam explains.

“I have a really strong network of family and friends, so having them help look after my son and bring him along to games made it much easier.”

In addition to her football and becoming a mother, in 2017 Pam took the decision to take on a full-time coaching role at the Palace for Life Foundation, where she works across the community encouraging young people to find happiness through a healthy lifestyle.

“She’s been a massive role model, she’s probably the biggest inspiration I have in my life,” says Ellie, a smile spreading across her face as she talks about her friend. 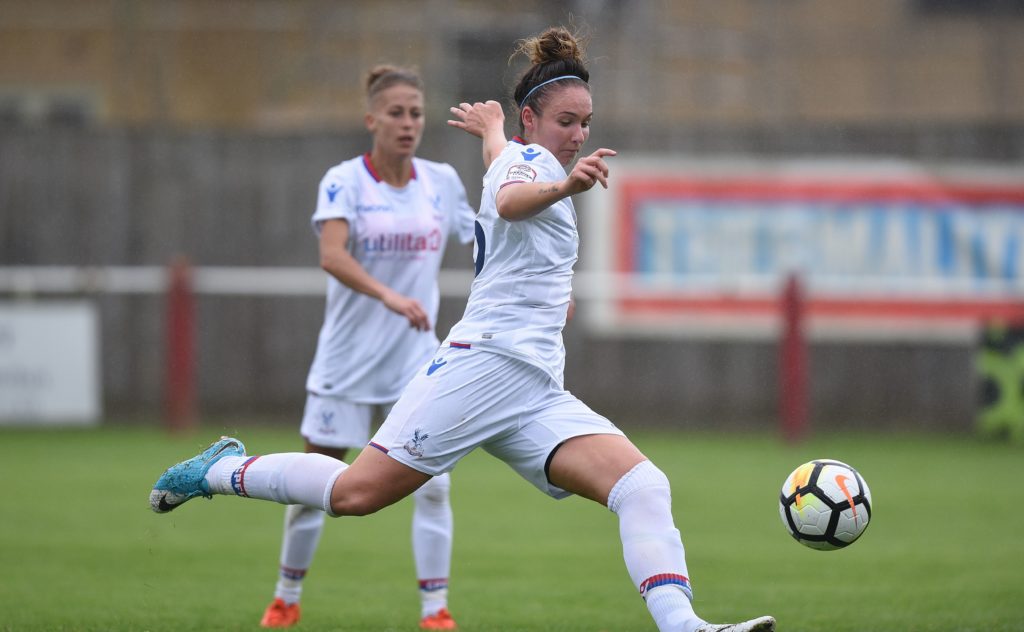 “She’s a mother, she works full-time and she still finds the time to play football and take her son to play football, she does that all by herself,” Ellie continues, before proudly revealing that she is god mother to Pam’s son, who is sitting nearby in full Palace kit.

Pam adds: “When I got the job at Palace, they were so supportive and worked around me and my son, I have the backing of my manager who knows I’m a single parent and they know it’s difficult, but I can fit my hours around my family life and my football.”

Speaking during FA Girls’ Football Week, the trio recognise the importance of not just supporting one another, but inspiring the next generation to follow in their footsteps.

“There wasn’t much women’s football on TV when I was young, but there are so many opportunities out there now, if you want to do it, you can, follow your dreams,” says Pam with passionate conviction.

Gemma adds: “Football keeps you motivated and you learn to be disciplined, you’re around a good network of people who have the same goals as you, the team has a really family feel to it.”

It then falls to Ellie, the youngest of the group, to conclude: “From a young age, football has given me a passion and drive to succeed. Being around a big group of girls, you get to know everyone as an individual, but you also come together as a team. 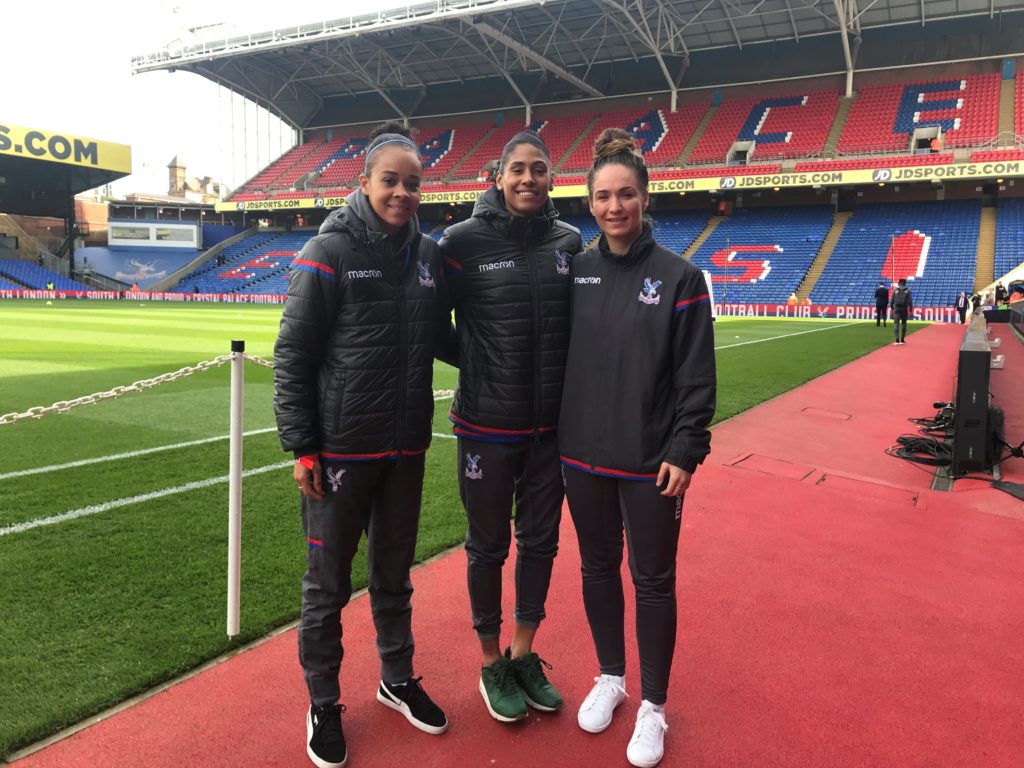 “You have to enjoy it, football is fun, that’s the most important thing!”

You can support Pam, Gemma and Ellie in their next home game when Crystal Palace Ladies take on Chichester City Ladies FC at Bromley FC – The Stadium, Hayes Lane, BR2 9EF. Tickets are £3 and U16s are free.