Players and children become Team Mates for the day 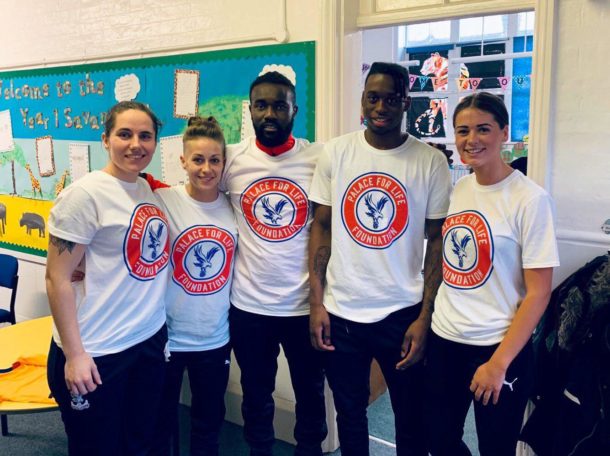 Wan-Bissaka, Souaré, Whinnet, Jones and Allen joined 12 pupils who were taking part in Team Mates, which is backed by Premier League Primary Stars and uses games and the power of Palace to encourage children to talk about their feelings and develop their emotional resilience.

The Team Mates session started with all pupils describing how they felt and sharing something that stood out over the past week before the Palace players surprised the group by coming into the session and joining the activities.

Games included a very competitive game of fizz, pop, bang, where the students worked together to get all of the players out first! Followed by a game of two truths and a lie, where we found out that Palace Ladies goalkeeper, Lauren-Amie Allen, has in fact won the FA Cup and did not actually go to the zoo last week.

Between taking part in these activities, Palace defender, Pape Souaré told us: “I’m very happy to be here, as it’s been my first time this year so I’m happy to share this moment with these kids.”

“It’s important to be a part of days like this because the young people follow sport a lot and they love football. It’s good for us to be here and share this kind of moment because they can grow up and become Palace fans or even players.”

The session finished with a chat and ‘check-out’ which included all pupils, players and Palace for Life coaches saying how they felt and what they were looking forward to in the coming week.

Eager to meet the rest of the students, the players prepared for their assembly appearance where they took part in a quiz alongside the pupils. The players were welcomed by a group of students performing Palace chants accessorised with red and blue pompoms in front of the rest of the school.

Splitting into teams, the Palace players took allegiance with the half of the school they were assigned, ready to take part in a quiz and win bragging rights. A quiz focusing on Palace and the Premier League, saw the players conferring with the loud and excited crowd to reveal what they thought the answer to each question was. Perhaps fortunately for their teachers, the quiz ended with a draw, with no time for sudden death, but a few prizes were dished out by Ladies players Lynch and Whinnett to a couple of lucky fans!

On visiting the school and attending the Team Mates session Aaron Wan-Bissaka said: “It’s important for us to get involved in the community and interact with young people. I can never believe the reception we get it and it was good to join in and play a few games and have a chat with the children.”

To see more about our Team Mates sessions and our visit to Raglan Primary School, make sure that you are watching Match of the Day on the morning of Sunday 10 March.