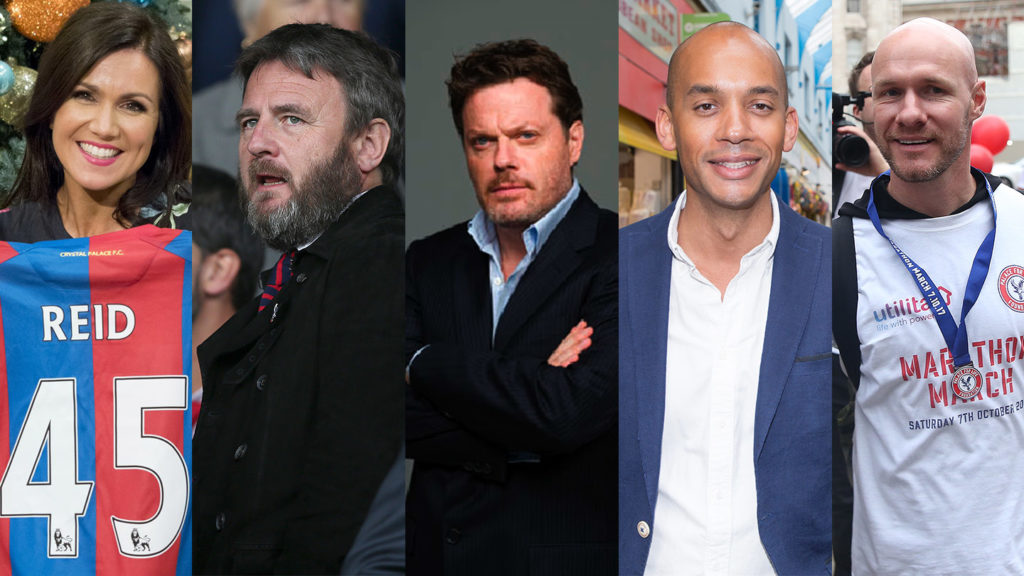 That trio are joined by Palace legend Andrew Johnson, who scored 85 goals in 161 appearances for the Club, and the Palace shareholder Stephen Browett.

World renowned stand-up comedian, actor and writer Eddie Izzard, who has followed the Club since the 1960s, said: “As a kid, my brother and I used to often go and visit our auntie Bea – our Mum’s older sister who lived on Whitehorse Lane, just opposite the Crystal Palace stadium. From there our uncle took us first to watch Palace play in 1969, when we had reached the First Division.

“So it’s now a great thing to be asked to be a Patron of the Palace for Life Foundation, an organisation that can help kids growing up in the area. I’m very happy to try and help.”

Host of ITV’s Good Morning Britain and prominent Eagles fan, Susanna Reid, added: “It’s a huge honour for me to become an Honorary Patron of the Palace for Life Foundation. The Foundation does great things for young people in south London and I’m proud to support that work.”

The Foundation has been working with the south London community for over 25 years, using the power of football to change the lives of disadvantaged young people, an issue close to the heart of MP for Streatham, Chuka Umunna.

He said: “I’m delighted to become an Honorary Patron of the Palace for Life Foundation. I first became involved with the club when I came to matches with my dad and later working in the box office.

“I’ve seen first-hand the excellent work that the Palace for Life Foundation does. They are making a real difference to young people across south London, particularly the most hard-to-reach and hard-to-help, by engaging them though football.

“I look forward to working closely with the Foundation, to help them build strong connections with the local community and business in order to equip young people with the skills they need for their future.”

Andrew Johnson, who led the Palace for Life Marathon March in 2017 and will once again be taking part in the charity walk in October, said: “Crystal Palace FC is very close to my heart and I have been working with the Palace for Life Foundation for a while now, so I’m really pleased to become an Honorary Patron.

“Football is such a powerful tool to engage young people who need some extra help in life. I look forward to supporting the Foundation as they continue their great work in the community.”

Crystal Palace shareholder and chairman of Farr Vintners, the world’s leading fine wine wholesaler, Stephen Browett, is keen to get more closely involved with the Foundation’s work in the community that he grew up in.

He said: “As a local boy and a Palace fan for 50 years, I’m extremely proud of our Club’s role in the South London community.

“I’m proud to become an Honorary Patron of Palace for Life. I’ve closely followed the Foundation over the past eight years and seen its impact on local youngsters, many of whom have had the toughest of starts in life. I look forward to sharing their journey in the future.”

The five patrons have been welcomed by Palace for Life Foundation Chairman, Ed Warner: “It is a great honour to welcome five Patrons of such renown who care passionately about our work with the south London community.

“In 2017 the Foundation engaged over 13,000 people through football but there is always more that we can do. I hope that together with Eddie, Susanna, Chuka, Andrew and Stephen we can strive to help even more people this year.”