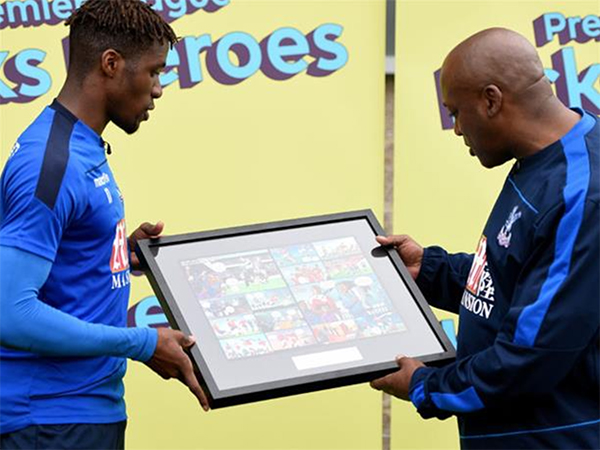 Premier League Kicks is a youth outreach programme with the aim to create safer, stronger and more respectful communities through the development of young peoples’ potential, whilst giving young people access to facilities, coaching and mentoring.

Wilfried Zaha was delighted to have the opportunity to hand over the comic strip to Michael.

“I’m glad to be able to present Michael with the Premier League Kicks hero award. Guys like him who give up their time to help young people in the community make a huge difference in people’s lives. It’s nice that he’s receiving this comic and he deserves his moment in the spotlight.”

Michael Lacey joined Crystal Palace as a community coach in 1999 and was a founding member of the club’s Premier League Kicks programme ten years ago. His hard work and dedication has been recognised by the club and the Premier League. Michael’s story has been immortalised in a comic strip illustration designed by Marvel and DC Comics artist John McCrea. The comic book charts Michael’s involvement with Premier League Kicks – opening with Michael watching Attilio Lombardo at Selhurst Park in 1998 and covering the 2013 Play-Off Final, which saw Crystal Palace promoted to the Premier League.

“I’m honoured to be named as Crystal Palace’s Kicks Hero as there are strong team of people who put a lot of time and effort into delivering coaching for young people in the local community. I can’t really believe it’s been 10 years since we first launched Kicks at the club. Time files when you’re having fun! I’m still as passionate as ever about delivering football coaching in the community. I get a lot of joy seeing Kicks participants go on to achieve their goals, whether its improved self-confidence, doing better in education or other areas – like Wilf’s achievements on the pitch.”