“I like helping young people get better at what they want to do.” - Academy Scholars inspire primary school children at south London school

A group of Crystal Palace F.C.’s young scholars visited a primary school in south London to help deliver a PE lesson and answer questions about their career so far, helping to inspire primary school children in the community.

Goalkeeper Laurie Shala, Right Back Kalani Barton, Striker Junior Dixon, and Centre Back James Leonard from Palace’s Under 18s squad all visited Oasis Ryelands Primary School in Croydon to help deliver a PE lesson to Year 1 pupils at the school before taking part in a Q&A with Year’s 5 and 6 students.

They helped deliver the lesson alongside Palace for Life coach Marcus, which included basic fitness in the form of running on the spot, planks, star jumps, and press-ups, before working on their passing, ball control, and balance in small groups.

The players got stuck in and even their ball control was tested at times when a few passes went at them faster than they expected! 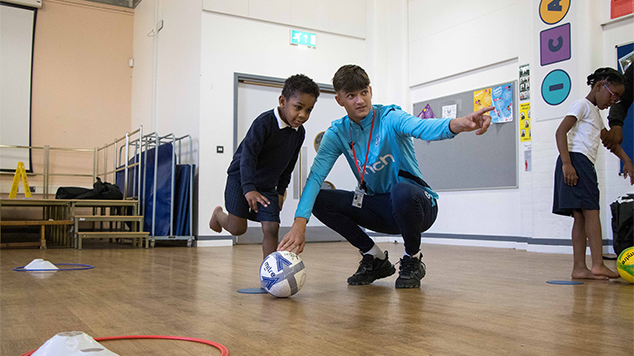 Junior Dixon, who’s been at Palace since Under 12s said:

“We get opportunities from the Academy to come and help out in the community and today we were helping kids in their PE lesson, and it was really fun seeing them. We were once that age and didn’t have people helping us so it’s nice to be able to come and help.”

Laurie added: “When you see them in their lesson and just say well done, you see the smile – they’re going to go home to their parents and that’s going to make their day.”

The Crystal Palace Academy is the pride of the club and has produced graduates such as Gareth Southgate, Victor Moses, and Wilfried Zaha over the years. Palace for Life has been working closely with the Academy for a number of years to give young scholars the chance to support their community and benefit from educational workshops the Foundation regularly deliver. 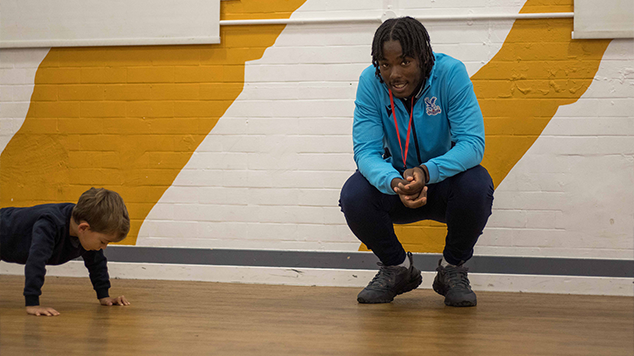 Junior, who, alongside Kalani Barton, helped collect food and supplies to be delivered to the people of Ukraine in March 2022 said:

“We’ve done some stuff with Foundation; we did some work with a foodbank to help the people of Ukraine which was really good – you get to see the other side of things. We’ve also had workshops where the Foundation has come in and spoken to us about different areas we could help in.”

Kalani, whose journey at Palace started when he was 8 years old added: “The Foundation is doing a really good job in our local community and I definitely want to do more stuff like this – I like helping young people get better at what they want to do, not just football, other stuff as well, like mentoring.

Today was great, it could be us in 20 years’ time at the end of our career, going back to help out kids who want to be just like us. Even now they are looking up to us so it’s always good to help the kids out.” 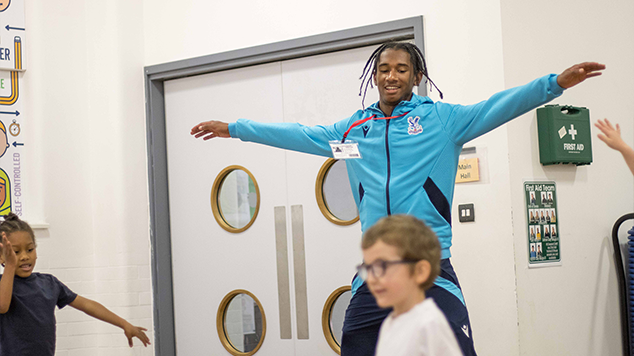 James Leonard, who signed for Palace over the Christmas period as an Under 16s prospect agreed: “We always get encouraged to help out in the community like today. It’s a good step forward to give something back and it doesn’t always have to be football.”

After an eventful PE lesson with the Year 1’s, the young players sat down with Year 5 and 6 pupils and answered questions about their lives in football so far. The inquisitive students asked the Scholars about everything from what inspires them to play football, who the toughest teams are to play, to who they would choose in the age-old Messi vs. Ronaldo debate. 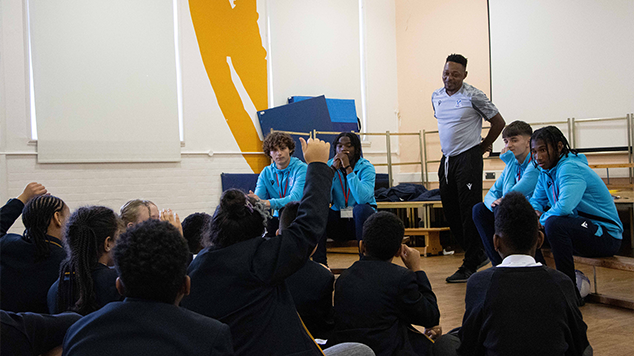 James Odagi, Programme Manager at Palace for Life reflected on how working closely with the Academy is important for inspiring future generations:

“It was great to see the Academy players getting involved with coaching the kids at Oasis Ryelands. I think it’s important for the players to be involved with the local community engagement initiatives – understanding they can have a big impact on inspiring future generations to get involved in football and wider sports is a crucial part of the work we do here at Palace for Life.”

Whilst the Academy and Foundation continue to strengthen their ties, there are still so many opportunities for young players to act as role models and get involved in giving young south Londoners the opportunities they deserve.

“I think opportunities like today are massive for the community and the development of our young players. Across the club we think of our players as more than just footballers, they’re a big inspiration to a lot of young children which is why we work so closely with our Foundation.” 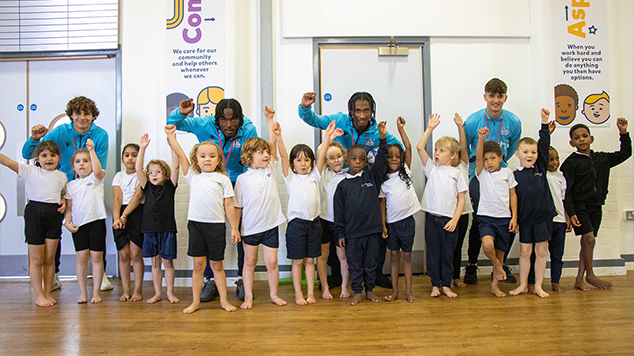 Shala, Dixon, Barton and Leonard posing for a photo with pupils from Oasis Ryelands

Palace for Life would like to say thank you to Laurie, Junior, Kalani, and James for coming along and helping to inspire the young pupils this week, and a huge thank you to Oasis Ryelands for giving them the opportunity to do so.

Find out more about our work in primary schools