Register for the 2019 Marathon March

Mark Silverstein raised an incredible £2000 for Palace for Life by taking part in last year’s Marathon March. He told us how he found the charity walk and why he’s signed up again this year: 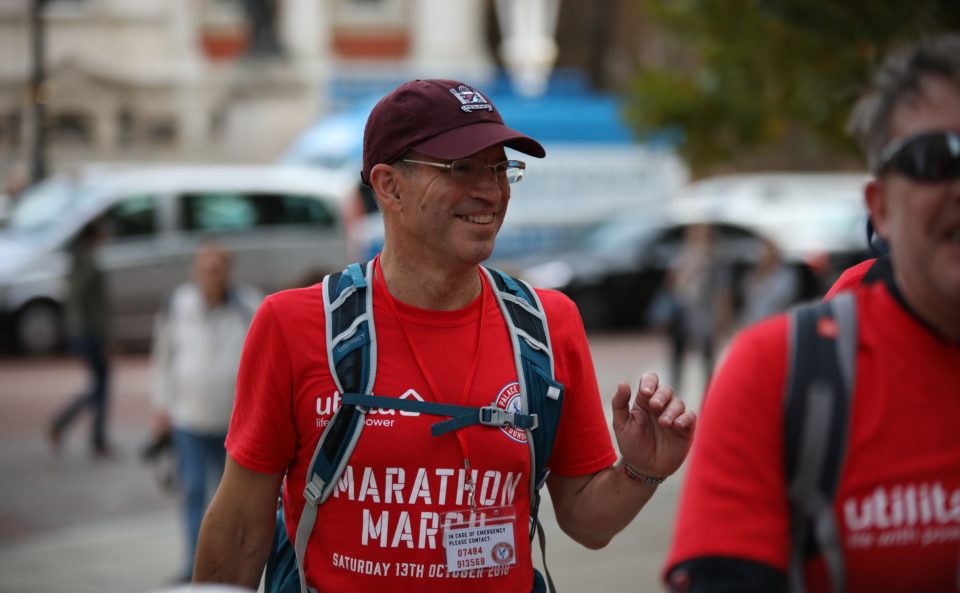 We gathered in the Main Stand for the pre-walk group photo and a review of the practicalities of the day. First off, there was a run through of the various groups that had signed up for the walk as a “team”.

So, were the Five Year Plan crew there? “Yes!” came the shout back. Back of the Nest?- “Yes!” The Eagle’s Beak?……silence. Suddenly our fearless leader Jay’s email popped into my head – “Happy for you to write a piece on the walk, you will be the sole representative for TEB.” So, I suppose I had better say something. I managed to get out a quick “oh, yes, that’s me – here!” before they moved on to the Pawsons Arms or whatever group was next – sorry Jay!

The day picked up almost immediately afterwards, starting with the Event Managers, Adventure Cafe (who really did a superb job), concluding their talk by saying that the walk last year was the friendliest and most enjoyable event they organised during the whole year. Typical Palace I thought.

We, all 152 of us, then set off in three waves, each separated by a minute or so. The waves soon blurred with everyone mixed up but the walk ended up quite spread out with a group of people including Steve Parish finishing about a hour before the stragglers at the end. The walk, however, lived up to its billing. It did not matter at all that I had not joined the walk last year, I was talking with people, nearly all of whom I had never met before, virtually every minute of the walk. 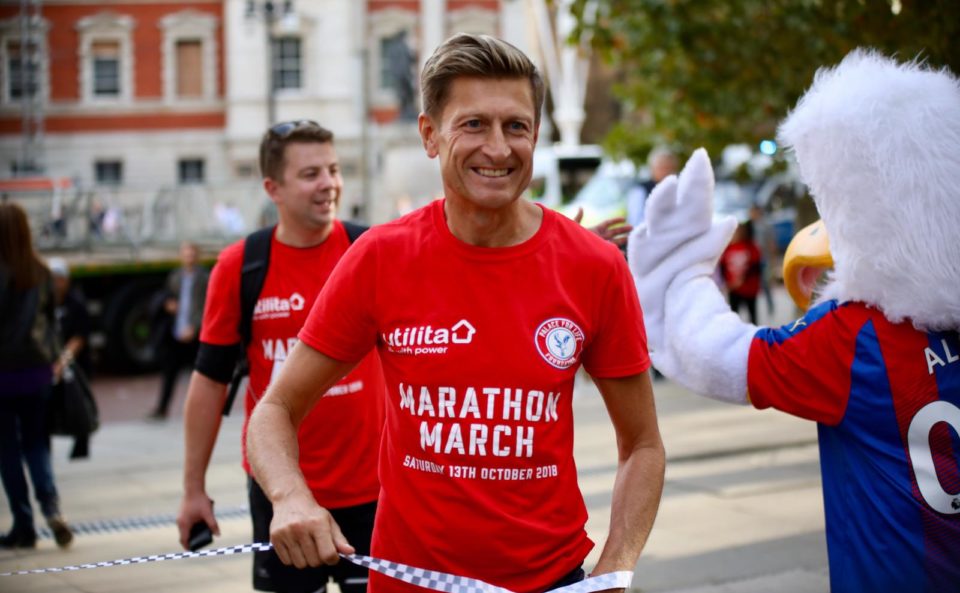 The weather was unbelievable for mid-October and I was glad I had brought a pair of shorts as the track suit bottoms were ditched by lunchtime. The route was well chosen and we spent a lot of time on Mitcham Common, Wimbledon Common, Richmond Park and the Thames Path.

I will not go through all the stories of all the people I talked to on the walk but will just mention Tony and Pat. Tony is a Sussex based Palace supporter, who was in the same wave as me and ended up walking with us at the start and the end (and most of the way in between). During the walk Tony mentioned he would love to get a photo with Andy Johnson holding up three fingers to share with his various Seaweed supporting friends. Tony got his wish – Andy was at the tea break stop towards the end of the walk and of course was delighted to oblige.

We spotted Pat hobbling quite badly about half way through the walk. It turns out he had hurt his knee after he signed up for the walk but was determined to do it. Unfortunately, he strained his hamstring trying protect his knee during the walk and by the time we met him, he was really struggling. Having found out about his predicament we got talking generally about football, his interests, his job and of course Palace. After a while he was walking more quickly, in less pain and was becoming more confident that he would be able to get to the finish line.

Eventually, he ended up ahead of us! We met up again at the end of the walk and the fact that he finished is a testament to Pat’s willpower, the power of the mind to either drag you down or propel you forward and teamwork. With a bit of distracting chat he was able to forget about the pain he was in and get through the hardest part of the walk. Meeting Pat was one of just many highlights of the day.

Suffice to say, over the eight hour period we spoke to lots of people including Ed Warner and Mike Summers, chair of the Foundation trustees and CEO of the Foundation respectively, both of whom were clearly backing the cause with their time (and blisters!) to raise as much money as possible. 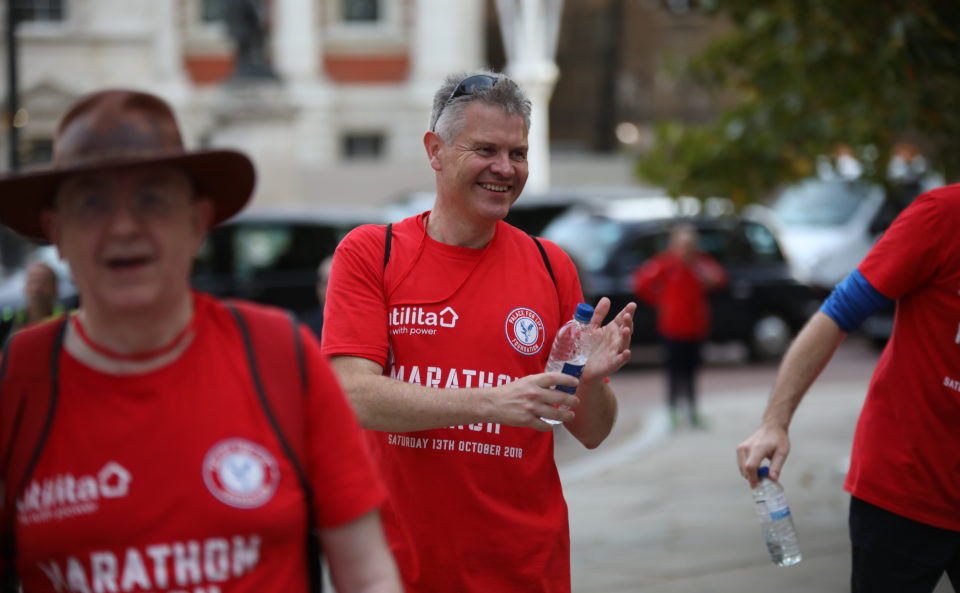 The miles flew by and although the last few along the Embankment were a bit of a grind, Julian, Tony and I chatted (with a bit of grumbling too) away the last stretch and at last we made it to the finish line. Photos taken, medals, received – it was time for the pub!

By the time we got to the designated watering hole, Riley’s Sports Bar, the party was in full swing and Steve Parish was just settling his tab. Clearly, we should have walked a bit quicker! There was a fantastic spread of food which was clearly needed judging by the speed it disappeared!

Steve gave a brief speech thanking everyone involved and this was followed a little later by another highlight of the day. One of the young members of the Down’s Syndrome football team supported by the Foundation wanted to thank everyone for their support. Through a combination of my mate Julian and Mike Summers the microphone was relocated. The look of pure joy on that boy’s face after his speech was met with a roar of “Eagles, Eagles!” from the whole room made the day all the more worthwhile.

Eventually, the adrenaline of finishing the walk was wearing off and the sore legs and feet were telling me it was time to go home. Both Julian’s partner and mine had very kindly come to the pub as well to celebrate with us and to walk/wheel us to our respective homes. After exchanging hugs/handshakes with the numerous people we met on the day, it was definitely time to go home.

I cannot finish this piece without a final word of thanks to the club, the Foundation, the event organisers Adventure Cafe, everyone else who helped out and most of all my fellow 152 walkers, all of whom made the Marathon March a memorable and enjoyable day out. Best of all, it was all in the name of a very worthwhile cause which will help hundreds of people in numerous ways.

At the last count, a total of over £100,000 has been raised by the Marathon March which is a quite fantastic achievement by all involved.