Home > News > Powerchair players ready to roar on the Eagles

Powerchair players ready to roar on the Eagles

Crystal Palace Powerchair FC players will be cheering on the Eagles at Selhurst Park next season after being given four free season tickets by the club. 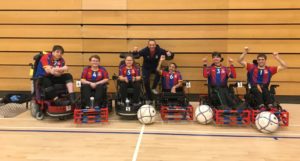 The team, which is run by Palace for Life Foundation and the Croydon Active Lifestyles Team, will have seats be in the accessible seating area in the Main Stand so they can follow the team’s progress in the Premier League.

Christine Sharp, mother of Matthew, one of the players said: “This is a really kind gesture from Crystal Palace and Matthew is very excited about attending!”

Powerchair football is for people with physical disabilities who use powered wheelchairs in order to manoeuvre and kick the ball. The sport is open to male and female players of all ages. 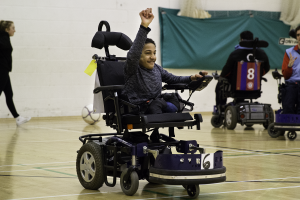 Janice, whose son Joel (pictured) is also in the team, explained: “It’s for all people and it’s all-inclusive. It’s liberating, because when you have a disability, that can stop you from joining in with your peers and there can be limitations to what you can do, but powerchair football gets rid of all of that.”

Last season, funding from the Palace for Life Super Draw helped to buy three new sports wheelchairs for the team, helping them win their first competitive points. The team has continued to go from strength to strength and head coach, Michael Harrington, thinks this is another step in the right direction.

He said: “It is fantastic that our players will be able to enjoy Palace games together next season and we are very grateful to the club for making this happen.”

A lot of our players face isolation problems and attending football games with their families and peers will give them the opportunity to experience something many of us take for granted.