It’s been a memorable year for our Disability Sport teams at Palace for Life. We hear from Michael Harrington, Palace for Life Disability Manager, who reflects on the Powerchair team’s season, and we take a look back at when Palace Women Players Leigh Nicol and Charley Clifford presented our end of season awards to the DS Eagles.

By Michael Harrington, Disability Manager at Palace for Life

Training started back last September at the Waddon Leisure Centre when we said goodbye to a few of our more established players who wouldn’t be with us for this season and welcomed our new teammates and their families into our close-knit group. These new players bought with them a real enthusiasm for the game, and when matched with the skills, knowledge, and passion of our existing players, the team clicked from the beginning.

Our first league fixtures in the WFA’s South East Regional League came in December, and after a narrow loss to pre-season favourites Greenwich, we got our first win of the season against the Aspire Lions with young Nadal Hanif scoring his first goal for us as he and Matt Sharp continued to develop their game understanding and control of the chairs.

The season continued and the victories started to come, including a Stanley Ball hat-trick to beat a very good Norwich team. We quickly moved up the league and were in second place challenging Greenwich for the title, due in no small part to Ozey Osman’s clean sheets in goal and Hugh Vaughn’s great ball striking. In the return fixture towards the end of the season Greenwich again proved too strong for us and their victory all but cemented them as well-deserved league winners. 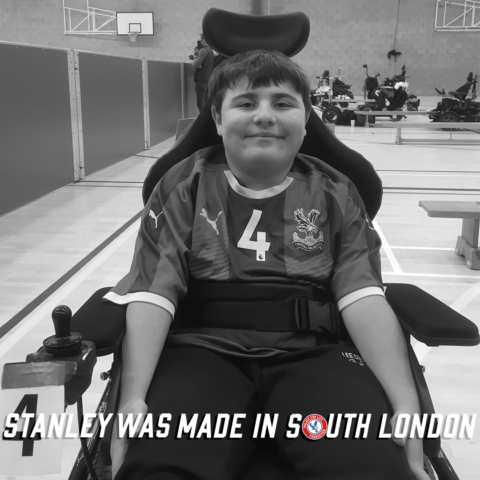 It wasn’t finished there though, and in the very last game of the season, with a number of our players not able to play in these 4 a-side sports, Can Emeklier and Joel Sprouse played as a pair against Solent and pulled off a remarkable 2-1 victory in a great show of team-work, courage, and tactical awareness.

We finished second in the league, narrowly missing out on promotion to League 1, with our most ever points, most ever goals scored and fewest ever conceded. All in all, it was a great show from all the players, who as ever are wonderfully supported by their families who we honestly couldn’t do this without.

The new season will be starting in September, and if you, or anyone else you know, thinks you may be interested in joining us then contact the Foundation’s Disability Manager Michael Harrington at michaelharrington@palaceforlife.org who will let you know all about it, and arrange for you to come down and have a look at what we do for yourselves.

A successful season was also had by our Down Syndrome team, the DS Eagles, who also had their end-of-season award ceremony recently, where every member of the team was recognised for their unique contribution to the successful season with awards matched to the attributes of their favourite Palace players.

A big thank you goes out to the DS Eagles squad, and to Crystal Palace F.C. Women players Leigh Nicol, Charley Clifford and Chloe Arthur for coming along to present the team with their awards.

James, the winner of the Eze moment, had an extra special message for coaches Ben and Arnaud. We think he speaks for everyone!

We can’t mention our amazing DS Eagles without reminding ourselves of their legendary trip to the first-team training ground back in May – take a look at the video below for an epic throwback to an unforgettable day.

For more information on our Disability Sport programmes, click here.

Disability Sport at Palace for Life